Formula One race predictions are increasingly relying on Big Data Analysis. With nearly 243 terabytes (a little over the data at US Congress Library) of data being generated by race teams combined in the 2014 U.S. Grand prix in Austin, TX, dozens of engineers are working on remotely tracking the data as far as U.K. in near- real time.

Formula One cars are now equipped with hundreds of sensors which generate data over a multitude of parameters ranging from tyre pressure to fuel- burn efficiency. This data transferred thousands of miles away using fibre optic cables on AT&T’s backbone to fully staffed operations at the team headquarters in U.K. Predictions are being made even before the race starts. “We’re looking two hours into the future and trying to predict where we’ll finish the race before it starts,” said Al Peasland, head of technical partnerships at Infiniti Red Bull Racing.

Tony Jardine, currently a Formula One analyst for Sky Sports in the U.K. with almost 20 years of experience in this field, including as an engineer and a team manager; has seen Formula One technology evolve from drawing boards to basic computers in the 1990s to the analysis and massive data collection today. “Data is so good for drivers that the pit crew could literally coach a driver to the most optimal racing conditions based on a live data feed of everything imaginable,” Jardine quoted. 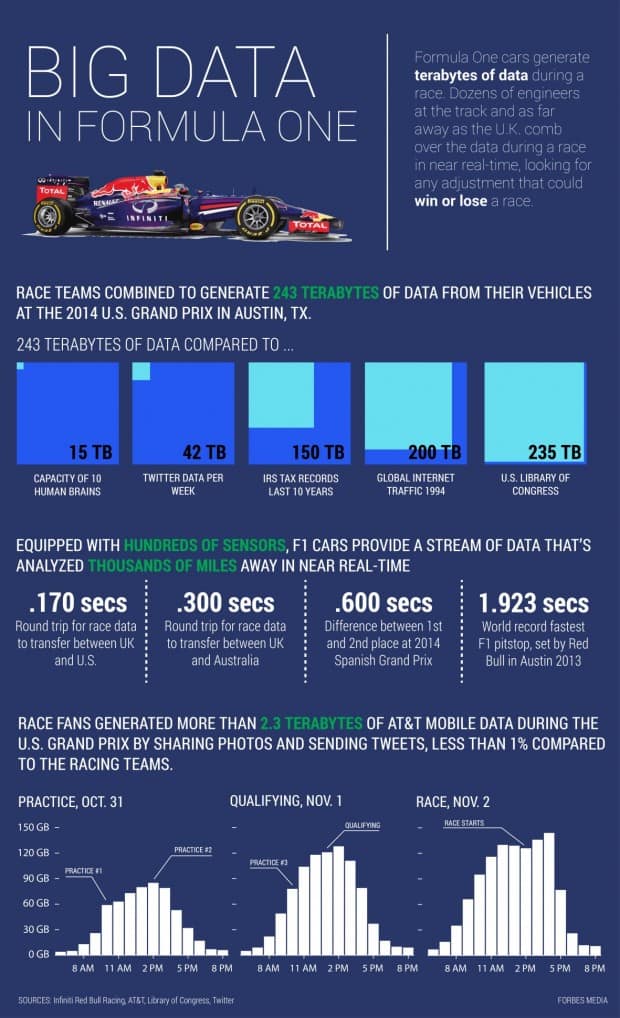 Quoting an example from 2012 where Red Bull Racing and its driver, Sebastian Vettel, received a clipping from behind, damaging his car in the first lap. Despite the accident, engineers were able to get him back into the race by their first scheduled pit stop, just 10 laps into a 71 lap race and devise a strategy just enough to secure him the world championship; Peasland stated “To win with such a fine margin and to have an accident like that at the very beginning and for the whole team to come together, it’s the race that films are made of,” said Peasland. “It’s about making educated decisions efficiently,” said Peasland, head of technical partnerships. “And that comes from measuring the right information.”

When the winning margin is in the range of .600 seconds, the stakes are high. Matt Cadieux, chief technology officer for Infiniti Red Bull Racing remarked that “It’s a data driven business and always has been”. “But the sophistication and speed of race simulations have improved just in the last few years, whereas races used to rely more on gut feel and experience.” The data analysis and processing has dramatically changed over the years, with simulations which would take weeks now getting done in hours; simpler simulations taking minutes and seconds.