This article is the first installment of the FinTech Explained series, which provides brief overviews of FinTech sectors including payments, transfers, lending, banking, wealth management, and currency, with the goal of educating about disruptions in financial services.

After a huge year in 2014, the payments sector of FinTech is booming. Venture capital investment reached an all-time high, and the money continues to roll in this year. There’s no shortage of activity happening with mobile, processing, transfers and cryptocurrency to keep us on our toes. Large tech companies such as Apple, Google and Facebook have ventured into payments territory, operating alongside traditional giants like Visa, MasterCard, and First Data. Smaller startups such as Stripe and Square have already proven themselves prolific, and even more promising companies are cropping up each month.

Here, we’ve crunched a world wide web of information to put together a brief overview of the current payments ecosystem, including key companies disrupting the sector and ones to watch, plus future prospects and challenges. But first, let’s begin with some history.

From bartering to Bitcoin

Mankind has never stopped devising new ways to pay for goods and services, however in recent years payment methods have advanced exponentially. The technological explosion pushed payments from exchanges of gold-backed US dollars to contactless, mobile, and crypto within a single century.

Here’s a bit of long-range perspective:

And here are a few highlights in payments from 2014:

2014’s payments milestones for startups, tech giants, and disruptive technologies have catapulted the sector forward into a bright start for 2015, and the momentum shows no signs of letting up.

Key disruptors and the current state of payments

Currently, major payments platforms are in a battle for market takeover – each of them aiming to be both secure and accessible, and thus attractive for consumer and business transactions. Countless startups are making their notable marks, big and small, with potential to develop into stars or cash out just as quickly as they appeared. Stripe and Paypal’s Braintree are leading the pack of e-payment APIs, acting as gateways for merchants to connect with acquiring banks. Stripe seems especially promising, positioning itself as a tech company to watch, nabbing a massive office space in San Francisco to house its impending growth, and raking in investment dollars.

The playing field with the highest stakes at the moment is mobile wallets. Apple Pay burst onto the market with its new NFC technology, and inked partnerships with a plethora of banks, merchants and payment processors. However, its fee system leaves something to be desired for many, including over 70 U.S. retailers who banded together to create their own Merchant Customer Exchange consortium, CurrentC. Google Wallet is another contender, claiming its cloud storage is an easier solution for merchants. While its integration with Gmail is attractive, this kind of cloud accessibility also comes with a higher security risk.

Other important areas for mobile include familiar mobile credit card payment (how long until we can say “traditional”?) technology. Companies such as Square, Paypal, SumUp, iZettle and Intuit dominate this realm. Coinbase is at the forefront of Bitcoin wallets. Also worth nothing are payments via SMS, which, while declining in popularity, still play an important role in many cloud-based payment systems for authorization and authentication.

Social media payments will be an area to watch in 2015, with Facebook soon unveiling friend-to-friend payments. Facebook’s aim is to bypass PayPal (or Venmo, now owned by PayPal and specifically designed for friend-to-friend payments). Snapchat’s payment service Snapcash is already in motion, as is Twitter Buy for select users and merchant partners.

Several trends and challenges are defining the payments industry moving forward. The first is the migration of EMV (Europay-MasterCard-Visa) chip card technology. Especially in the U.S. – the world’s leader in payment card transactions – the switch to EMV compliance is important. Mobile technology is spreading rapidly and credit card fraud now logs an annual $8.6 billion in damages. Liability issues for merchants and issues come along with the shift; according to Mastercard, any “party, “either the issuer or merchant, who does not support EMV, assumes liability for counterfeit card transactions.” But fraud itself, a second challenge for payments companies, is also happening with mobile wallet technologies such as Apple Pay and Venmo.

For newer startups, the real challenge moving forward is entering and carving out a niche in the complex and entrenched credit card processing network. Luckily, the established payments industry is generally choosing to accept technology instead of litigating it out of existence – which would undoubtedly prove fruitless over time.

“Our industry has embraced disruptive technology in ways that others have not,” says Jason Oxman of the Electronic Transactions Association.

Rick Yang of multi-billion-dollar VC firm NEA even mentions a “synergistic” relationship between existing players and payment rookies. Even so, the endgame for payment startups may just be acquisition by one of the tech giants such as Google or Apple.

The shift toward mobile payments and wallets will continue to barrel forward, with the eventual possibility of eliminating the need for plastic cards altogether. Payments through a text or tweet could become the norm. The nature of the future payments ecosystem really depends on whether or not NFC payment technology takes off in ways it’s expected to, and if compliance and security are in line with such disruptive technology. In addition, Bitcoin wallets – although with slowing growth – are important in forcing us to consider new ways to think about money and everyday transactions. 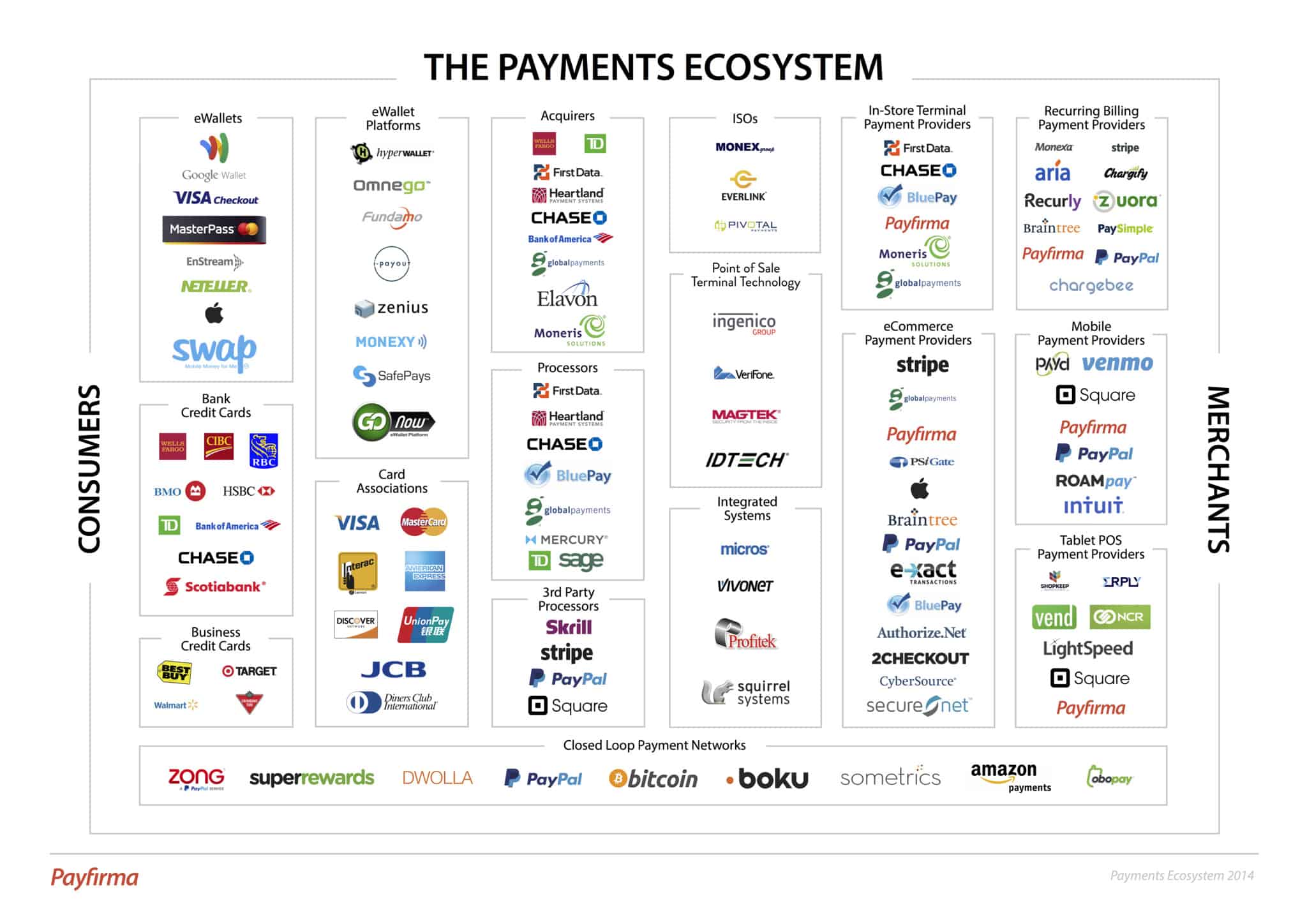 The payments space is just getting started. Are you keeping an eye on a particular startup or trend in payments? Let us know.

Man and the Machine Partner to Solve the Big Data Dilemma