How Zalando Used Bayesian Statistics to Save Loads of Money

Everyone likes to save money–and when you’re running a huge business like Zalando, saving money by making your systems more efficient can mean saving millions of Euros. That’s why I’m excited to tell you that the Zalando Data Intelligence team recently found a way to save us piles of money. In this post, I’ll tell you how.

Until recently, the only way that Zalando’s warehouse workers were able to determine the weights of our hundreds of thousands of items was by weighing each item manually. As you can imagine, this was a labor-intensive, time-consuming and expensive process.

It recently occurred to us that we could greatly simplify our operations by replacing our manual weight estimation process with highly refined data from another, automatic process. Here’s where those huge savings for Zalando appears: By accurately inferring the individual item weights from the parcel weights, we save A LOT of Euros–and a lot of our workers’ time.

The key here is that we already have data for free on the volume and weight of every parcel that leaves the Zalando warehouse. After a parcel is packed but before it is given to our logistics partners (like DHL) for delivery to the customer, its volume and weight are automatically measured. We just need to somehow get the individual article weights from this data. The figure below shows the weights and volumes of some parcels that were measured: 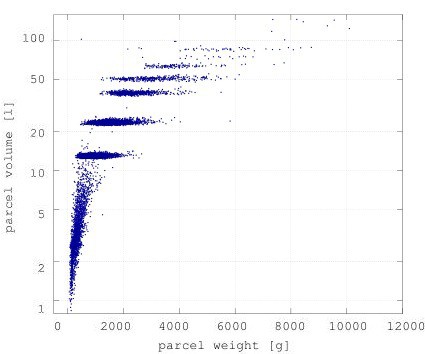 Because of Zalando’s massive size and speed of operations, we need a much cleaner, more accurate method. For this, our data intelligence team turned to Bayesian statistics. In our next tech blog article we’ll go into the mathematical details of the Baysian model we used. If you want to see a cool example of statistical modeling in action, the next article is perfect for you. But this is the fluffy non-technical article, so we’ll go straight to showing you how awesome our weight estimation method is.

There are many different criteria for evaluating accuracy, so let’s look at how our weight estimator performed compared to various evaluation criteria.

Many Zalando items have already been weighed manually, so a natural evaluation strategy would be to compare the measured weight of an article against its estimated weight: 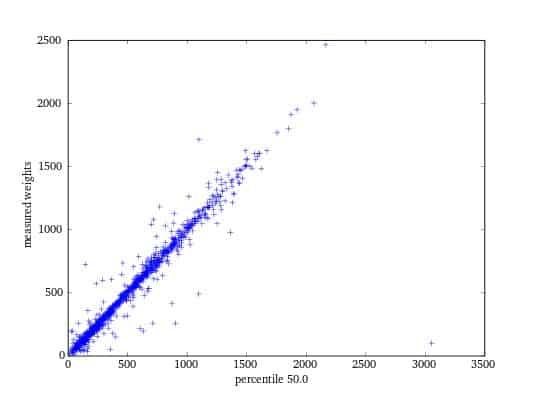 Pretty good, but there are still some errors. The next few sections explore why we believe that many of these errors came about from manual measuring, not from our weight estimator.

Another way to gain a stronger understanding of how our estimator performs is to subtract the weight of each parcel from the estimated weights of the items inside that parcel. Then we can see how the differences cluster around the true packaging weights.

Figure 3 shows the results of our manual process, in which we subtracted the measured items’ weights. This revealed two important things: 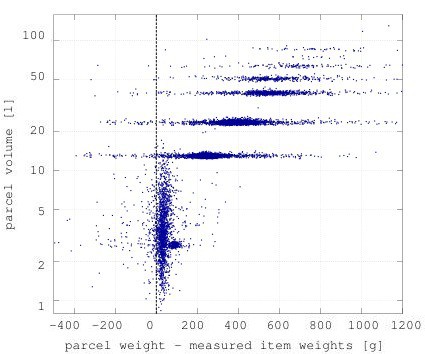 Figure 3: The volumes and weights of parcels after we subtracted the weight of the items in the parcel, where the item weights were obtained via a manual weighing process. 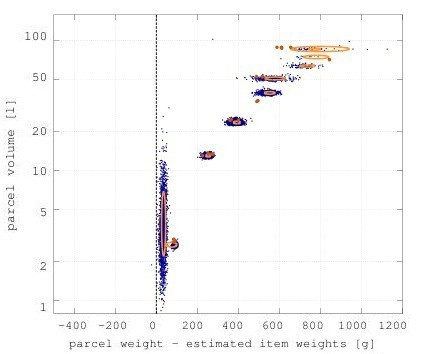 Figure 4: The volumes and weights of parcels after we subtracted the weight of the items in the parcel, where the item weights were obtained via our weight estimator. The orange lines represent where most of the mass of the clusters lie

If you remember back, we didn’t just want to produce estimates of article weights, but also wanted to generate so-called confidence intervals. A confidence interval is when we can say that an article weighs between 150 and 170 grams with a 90% probability. Our automated weight estimator delivers results that nicely fit the data.
In Figure 5, each blue dot represents an estimated article weight. The position of particular dots on the y-axis is the relative error defined as 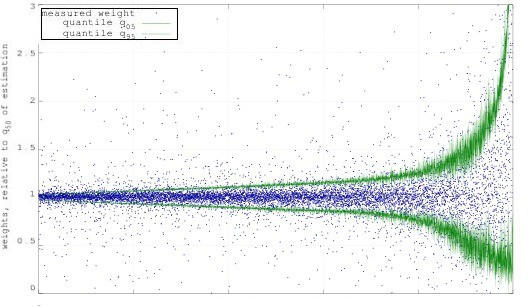 Deriving our new measuring model and verifying that it works took some effort! But it was all worth it, because now we have:

And most importantly: our warehouse workers can now focus on getting your fashion to you as quickly as possible. That’s isn’t just saving money–that’s priceless.

If you liked this post, be sure to read (and like) the next article with all the great mathematical details of our Bayesian model.

This post was written by Calvin Seward, Urs Bergmann and Roland Vollgraf from the data science team at Zalando, and originally appeared here. The Bayesian model was developed by Roland Vollgraf- Zalando’s Data Science Expert- with Urs as an important collaborator.

How Deep Learning is Personalizing the Internet

How Zalando Used Bayesian Statistics to Save Loads of Money