Why You Should Learn R First for Data Science


Over and over, when talking with people who are starting to learn data science, there’s a frustration that comes up:

“I don’t know which programming language to start with.”

I get it. When I started focusing heavily on data science a few years ago, I reviewed all of the popular programming languages at the time: Python, R, SAS, D3, not to mention a few that in hindsight, really aren’t that great for analytics like Perl, Bash, and Java. Even today, I just read a suggestion (by a well known data science blogger) to use somewhat arcane tools like UNIX’s Awk and Sed. (Don’t worry if you have no idea what Awk and Sed are, because you shouldn’t learn them. Not in the beginning.)

And that’s the crux of the problem. The fact is, your time is limited. Learning a new programming language is a large investment in your time, so you need to be strategic about which one you select.

To be clear, some languages will yield a very high return on your investment (your investment of both time and money). Other languages are purely auxiliary tools that you might use only a few times per year.

Let me make this easy for you: learn R first.

Focus on one language

As I’ve published R tutorials here at Sharp Sight Labs, I’ve had several people ask me whether or not they should learn Python (at the same time). My answer to this is essentially “no.” Unless you have a direct need for more than one language, you should select one.

Almost without reservation, I recommend that you learn R as your first “data science programming language.” While there are exceptions (e.g. if you have a specific project need), I think that R is the best choice when you’re getting started.

R is becoming the “lingua franca” of data science

R is becoming the lingua franca for data science. That’s not to say that it’s the only language, or that it’s the best tool for every job. It is, however, the most widely used and it is rising in popularity.

As I’ve noted before, O’Reilly Media conducted a survey in 2014 to understand the tools that data scientists are currently using. They found that R is the most popular programming language (if you exclude SQL as a “proper” programing language).

A similar ranking by TIOBE (which ranks programming languages by the number of search engine searches) indicates a strong year over year rise for R. 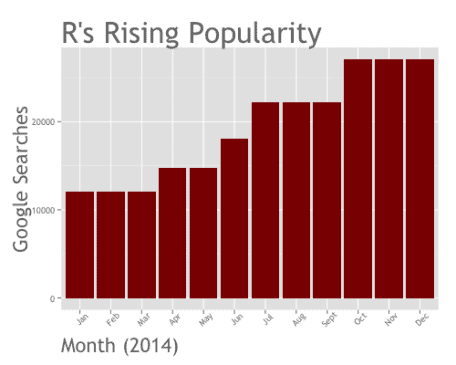 Keep in mind that the Redmonk and TIOBE rankings are for all programming languages. When you look at these, R is now ranking among the most popular and most commonly used over all.

(To get an idea of how a company like Facebook uses R, I would definitely check out Solomon Messing’s blog. Solomon is a data scientist at Facebook, and his blog posts demonstrating R are excellent.)

As Revolution Analytics recently noted, “R is also the tool of choice for data scientists at Microsoft, who apply machine learning to data from Bing, Azure, Office, and the Sales, Marketing and Finance departments.”

Beyond tech giants like Google, Facebook, and Microsoft, R is widely in use at a wide range of companies including Bank of America, Ford, TechCrunch, Uber, and Trulia.

R is popular in academia

R isn’t just a tool for industry. It is also very popular among academic scientists and researchers, a fact attested to in a recent profile of the R programming language in the prestigious journal Nature.

R’s popularity in academia is important because that creates a pool of talent that feeds industry.

Said differently, if the best and brightest people are trained in R at university, then that will increase the importance of R in industry. The supply of academics, PhDs, and researchers who leave academia for business will create it’s own demand for people with R.

Learning the “skills of data science” is easiest in R

The popularity of R isn’t the only reason to learn R, however.

In selecting a language, you need a language that has significant capabilities in each of these areas. You need tools for performing each of these tasks, as well as resources for learning them in the language you choose.

As I noted above, you need to focus much more on process and technique, not syntax.

You need to learn how to think about solving problems.

You need to learn how to find insight in data.

To do this, you’ll need to master the 3 core skill areas of data science: data manipulation, data visualization, and machine learning. Mastering these skill areas will be easier in R than almost any other language.

It’s often said that 80% of the work in data science is data manipulation. More often than not, you’ll need to spend significant amounts of your time “wrangling” your data; putting it into the shape you want. R has some of the best data management tools you’ll find.

I’ve said numerous times, that there is a deep structure to all statistical visualizations. There is a highly structured framework for thinking about and creating all data visualizations. ggplot2 is based on that framework. By learning ggplot2, you will learn how to think about visualizing data.

Moreover, when you combine ggplot2 and dplyr together (using the chaining methodology), finding insight in your data becomes almost effortless.

When you’re ready to start using (and learning) machine learning, R has some of the best tools and resources.

Here’s a quick review of tools you might consider after you learn R:

I love D3. The visualizations created in D3 are beautiful, and the interactivity of D3 visualizations is perfect for building dashboards. My issue with it is that it doesn’t scale well. To me, D3 is much more of a “craftsman’s tool.” It’s great for building an elegant data visualization, but creating such things more-or-less “by hand” won’t scale under circumstances where you have to support dozens of partners with new analyses and ad-hoc requests.

I’m also optimistic that R’s ggvis will allow R users to create highly dynamic and interactive visualizations, so at some point, R users may be able to learn R’s ggvis instead of D3.

So to reiterate, choose one language. If you’re starting out, R is almost certainly the best choice. And, really focus on learning the skills of data science.

Additionally, once you start to learn R, don’t get “shiny new object” syndrome.

You’re likely to see demonstrations of new techniques and tools. Just look at some of the dazzling data visualizations that people are creating.

Seeing other people create great work (and finding out that they’re using a different tool) might lead you to try something else. Trust me on this: you need to focus. Don’t get “shiny new object” syndrome. You need to be able to devote a few months (or longer) to really diving into one tool.

And as I noted above, you really want to build up your competence in skills across the data science workflow. You need to have solid skills at least in data visualization and data manipulation. You need to be able to do some serious data exploration in R before you start moving on.

Spending 100 hours on R will yield vastly better returns than spending 10 hours on 10 different tools. In the end, your time ROI will be higher by concentrating your efforts. Don’t get distracted by the “latest, sexy new thing.”

Why You Should Learn R First for Data Science