The Data Science Behind Santa’s Journey

For years, scientists have been baffled how one overweight man could manage to deliver presents to all of the world’s children (or the good ones, at least) in one night. It’s spawned into a whole field of research- honestly. We look at the data behind Santa’s route- how fast he’d have to travel, how much his sleigh would weigh, and whether there’s any plausible explanation for how one man could be so hilariously productive in just one day. 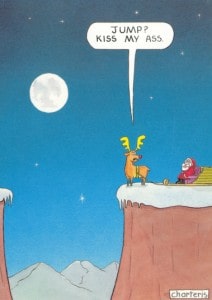 Santa has to deliver gifts to around 200 million children spread over 200 million square miles. Because each household has 2.67 children, there are about 75 million homes to visit and the average distance between homes is about 1.63 miles, Santa needs to cover 122 million miles.

To cover that distance in 24 hours on Christmas, Mr. Claus’s sleigh would need to travel at a whopping average speed of 5,083,000 mph.

A fabulously irreverent piece from Linda Harden of The University of Maryland estimates that Santa can travel 3x slower than Chivers suggests and still make it. Her reasoning is as follows:

Santa has 31 hours of Christmas to work with, thanks to the different time zones and the rotation of the earth, assuming he travels east to west(which seems logical). This works out to 822.6 visits per second. This is to say that for each Christian household with good children, Santa has 1/1000th of a second to park, hop out of the sleigh, jump down the chimney, fill the stockings, distribute the remaining presents under the tree, eat whatever snacks have been left, get back up the chimney, get back into the sleigh and move on to the next house. Assuming that each of these 91.8 million stops are evenly distributed around the earth (which, of course, we know to be false but for the purposes of our calculations we will accept), we are now talking about .78 miles per household, a total trip of 75-1/2 million miles, not counting stops to do what most of us must do at least once every 31 hours, plus feeding etc.

This means that Santa’s sleigh is moving at 650 miles per second, 3,000 times the speed of sound. For purposes of comparison, the fastest man- made vehicle on earth, the Ulysses space probe, moves at a poky 27.4 miles per second – a conventional reindeer can run, tops, 15 miles per hour. 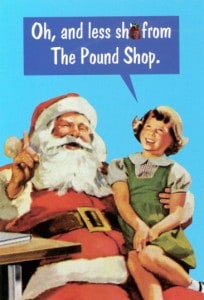 Harden’s estimates assume that Santa is feeling alot less generous this year, and will be providing every child with a just medium-sized Lego set. Assuming each set is 2lbs, Harden’s estimated weight of gifts (adjsuted to exclude children who do not celebrate Christmas) is 321,300 tons. Assuming a reindeer can pull no more than 300lbs each, you’d need 214,200 to pull the sleigh- which would bring the weight up to 353,430 tons. This estimate excludes the weight of the sleigh, and of Santa himself, who has been described by numerous sources as a generously-proportioned man. 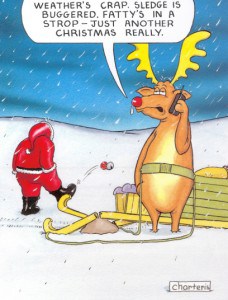 353,000 tons traveling at 650 miles per second creates enormous air resistance – this will heat the reindeer up in the same fashion as spacecrafts re-entering the earth’s atmosphere. The lead pair of reindeer will absorb 14.3 QUINTILLION joules of energy. Per second. Each. In short, they will burst into flame almost instantaneously, exposing the reindeer behind them, and create deafening sonic booms in their wake.The entire reindeer team will be vaporized within 4.26 thousandths of a second. Santa, meanwhile, will be subjected to centrifugal forces 17,500.06 times greater than gravity. A 250-pound Santa (which seems ludicrously slim)would be pinned to the back of his sleigh by 4,315,015 pounds of force.
In conclusion — If Santa ever DID deliver presents on Christmas Eve, he’s dead now.

However, hope may not be lost. Silverberg posits that Santa’s journey is entirely plausible if he makes use of relativity clouds. Relativity clouds would allow santa to control time and space relative to the outside world, giving him months to deliver gifts while only a few minutes pass for the rest of us.

In conclusion: either Santa has burst into flames, or he has an unparalleled understanding of relative physics. We certainly hope it’s the latter.