Predicting Deaths in Game of Thrones With Statistical Modelling

Who Will Be the Next Character to Die in Game of Thrones?

It’s a question that is likely to have been brought up in your social circle at some point in the last couple of years – and a perfect opportunity to arm yourself with predictive analytics.

Richard Vale, a statistician at the University of Canterbury in Christchurch, has created a model that looks at the number of ‘point of view’ chapters from each of the major characters in the series, creating a probability distribution for their continuance in the future novels. Essentially, at what point dear old George is going to write them out of the story in the usual sanguinary manner.

This project is an attempt to encourage other statisticians to test their theories on events yet to happen, rather than simply explaining observed data. Models geared toward prediction are much more valuable in real world applications, which is demonstrated by the swift adoption of the ‘black-box’ machine learning models which often predict more accurately than statistical models.

“A model which explains but does not predict isn’t a model; it’s a religion.”  [source]

The model indicates that Jon Snow has a 60% chance of surviving in book six, since this is less than his probability of having zero POV chapters. To readers of the series this may seem like an inaccurate probability, and it should be noted that the model doesn’t account for the exact circumstances of the character. Other issues with the model include not being able to take into account the introduction of new characters, and how that impacts the number of POV chapters distributed amongst the existing cast.

So how likely is your favourite character to make it through the next two books? This graph will help to demonstrate: 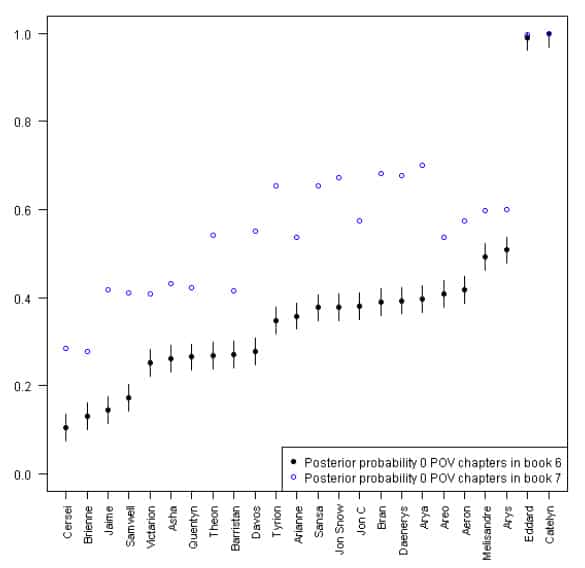