Tesco Plc, the British supermarket chain, is currently the second most profitable retailer in the world with outlets in twelve countries. Although it began as a more down market grocery market, it began expanding its reach in the early to mid-90’s to include financial and telecom/internet services, as well as launching a loyalty card program. Thus Tesco began collecting ever more data on its consumers and was one of the first companies to embrace, and learn from, Big Data analytics. Thanks in part to this new approach Tesco managed to expand its market share by over ten percent in the coming ten years and re-accelerated its sales growth that had previously been floundering.

Beginning of the 1990s, Tesco faced numerous challenges to its existing business model that it needed to find a way to overcome. New Greenfield sites, which it used to develop into hypermarkets were difficult to come by and the competition through existing chains and new arrivals in the sector was also generally very strong. So in 1995, Tesco introduced the Clubcard, its own loyalty scheme. Most competitors used it only as a means to target discounts and coupons and so quickly abandoned the scheme as unprofitable. Tesco, however, realized the value of the insight it would be getting into its customers’ behaviours and now receives detailed data on two-thirds of all shopping baskets. Tesco was unable to process the flood of data that descended upon them and so very early outsourced the analysis to Dunnhumby, a company they would later buy a majority stake in. 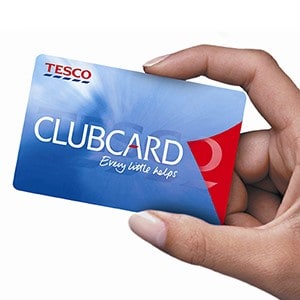 The first step, however, was to segment the customers into appropriate groups. That resulted in two things. On the one hand Tesco could actually be more targeted in its mailings of vouchers and coupons (which worked: rate of redemption for coupons shot up from 3% to 70%), but it could also launch new product lines according to customer demands. Upmarket customers were targeted through product lines such as ‘Tesco Finest’, the health-conscious customers could now buy ‘Tesco Healthy Living’ and ‘Tesco Value’ aimed to entice the price-sensitive among Tesco’s customers. The mailings became more complex also. As data from Clubcard subscribers became more insightful the variations on the standard Clubcard mailing rose from a mere 100 after the fifth mailing to over 145.000 in 1999.

Having broken down customers into segments, Tesco increased its reach by launching the Clubcard Plus, which had an integrated debit card. This was later replaced by a credit card but nonetheless lured customers into spending more at Tesco. Using all this data Tesco started trying to convert the non-buyers. For example, finding that recent parents were spending their money elsewhere, they launched a Baby club and ended up capturing 24% of the baby market.

Seeing that its analytics approach worked, Tesco started applying it to other fields also. One example is its optimized stock keeping system which forecasts sales by product for each store based on historical sales and weather data. Through predictive analytics Tesco managed to save 100m pounds in stock that would have otherwise expired and thus wasted. In another instance Tesco found that its management of the fridge and store temperatures was sub-optimal and thus enabled significant savings in energy costs.

Using the insights it gained from the collected data Tesco evolved from a retailer that thought it knew what the customers wanted into one that actually did know and could monitor the preferences as they changed over time. Tesco managed to break its customers down into segments it understood better and thus target its sales efforts accordingly.