The power of Algorithms to calculate, contemplate and anticipate the needs of patients is improving rapidly and still has no sign of slowing down. Everything from patient diagnosis to therapy selection will soon be moving at exponential rates. Does that mean the end of doctors? Not quite. To better understand technology’s ever-growing role in healthcare, we first have to better examine the potential of tools and timelines that we are working with. A recent study done at Beth Israel Deaconess Medical Center (BIDMC) and Harvard Medical School showed that AI isn’t about Humans versus Machines. They trained a Deep Learning Algorithm to identify Metastatic Breast Cancer by interpreting pathology images. Their algorithm reached an Algorithm Accuracy of 92.5%, where pathologists reached an accuracy of 97%. But used in combination, the detection rate approached 100 percent (approximately 99.5 percent). It is exactly this kind of collaboration between humans and machines that is going to play a vital role in the age of AI and we already have a blueprint of how a productive partnership could look.

Digitization in the next Decade

10 years is a long time, when you consider that during this period we will have access to new neurosynaptic processing power such as IBM’s TrueNorth or cloud based quantum computing. Ten years ago the iPhone got introduced which led to the development of 180.000 registered health apps, which equals 50 apps a day. Yes, a large part of them aren’t useful, but we can’t ignore the impact apps had on patients and clinicians. During the last 5 years we have seen error rates on speech and image recognition drop by over 20 percent to nearly human accuracy. So it is not a long shot to predict that, soon algorithms will over-perform humans on specific tasks such as diagnosing disease or selecting the best personalized treatment plan. We can’t ignore technology that, depending where you live, can deliver 10 to 100 times better results. A new study is published every month, which proves this potential: even today, such diagnostic algorithms have an error rate of only 5% when detecting melanoma. Among the best human specialists, it is 16%. 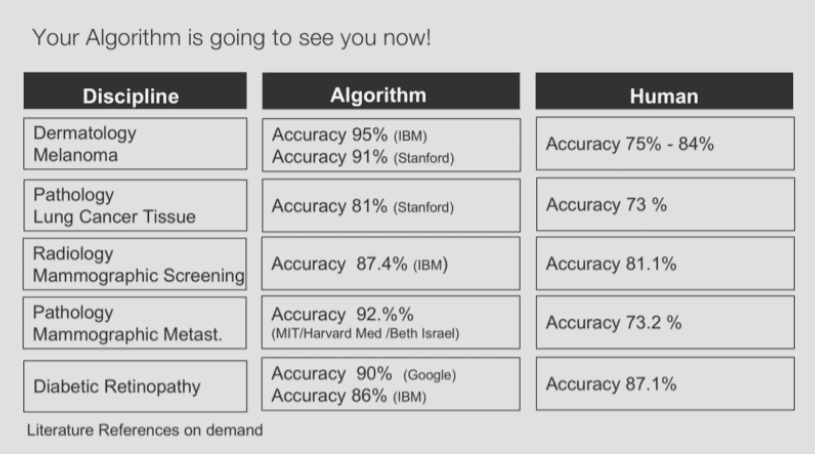 Today’s doctors are no longer in a position to know everything that is being published – on average, 800,000 studies per year are published in more than 5,600 medical journals. What person can could ever hope to process all of that? With the current pace of advancements in AI one can easily assume that in 10 years from now algorithms will over-perform humans on 80% of today’s classified diagnosis.

I refer specifically to “today’s classified diagnosis” because I believe that the impact of precision medicine will also bring about a complete change in medicine, and we will have to re-write the textbook of medicine.

Thanks to new technologies from genome diagnostics and the application of artificial intelligence, we are able to better understand and influence the development of diseases and aging processes. This means that in the near future it will no longer be primarily a question of treating diseases, but of preventing them.

The End of Doctors?

There are many claims that new technology will eventually replace doctors. Personally, I hope they don’t. Studies have already shown that diagnostic and treatment quality is much better when human physicians and algorithms work together. Chess was one of the first areas that was taken over and subsequently dominated by machines almost 20 years ago. After Garry Kasparov, the reigning world champion at the time, lost to the IBM Computer ‘Deep Blue’ in 1997, the head to head contest between humans and machines lost much of it’s appeal. Today no human, not even the grandest of all grand masters, can beat even a mid-tier chess program running on an iPhone. After this huge symbolic victory for the machines there was doubt that humans could contribute something meaningful to the world of chess ever again. But the advent of so called ‘freestyle chess’ tournaments showed how much humans still had to offer the game of chess. These events are played by teams that can include any combination of human and machine players. The surprising insight of those tournaments is that the teams with the strongest human / machine partnership dominate even the strongest computer. Kasparov himself explained the results of a 2005 freestyle tournament like this:

The surprise came at the conclusion of the event. The winner was revealed to be not a grandmaster with a state-of-the-art PC but a pair of amateur American chess players using three computers at the same time. Their skill at manipulating and “coaching” their computers to look very deeply into positions effectively counteracted the superior chess understanding of their grandmaster opponents and the greater computational power of other participants.

What helped the team win didn’t have anything to do with being the best chess players or having the most powerful chess computer but having the best process of collaborating with machines. It was all about the partnership and the complementary interplay between humans and machines. Humans still have a lot to offer to the game of chess if they are not racing against the machines but with the machines. To achieve the best results humans and machines have to collaborate — they have to become partners. But this requires a new set of skills and a new way of thinking on the part of humans.

We also know that in our current healthcare systems we are lacking the human element. Recent studies have shown that our social determinants count for more as 50% to our health status. From a 7 minute consultation a physician spent less then 20% for true human interaction, and is focussed on collecting clinical data, reasoning, documenting, administrating and coordinating. But one of the most important parts of care delivery, empathy and compassion have become neglected. This already starts at medical school.

Compassionate care makes a difference in how well a patient recovers from illness. In healthcare good communication and emotional support sometimes decides whether a patient lives or dies, but today there is no billing code for compassion. Ken Schwarz, the founder the Schwartz Center, believed that acts of kindness — the simple human touch from my caregivers — have made the unbearable bearable. So if a 7 minute consultation today, involves 6 minutes of activities that will be automated, can we please fight for a system that rewards compassion and other human values that are so desperately needed in the healthcare system and will hardly be replaced by robots or machines.

With more data from machines also comes more empowerment for patients. People will have more and more monitoring tools available, and diagnostics will become increasingly decentralized. That is why patients will take much more responsibility for themselves. Like doctors, however, this does not mean that GPs will become superfluous; they will probably communicate them more frequently online in the future. Diabetes patients, for example, can already bring their diabetes level to normal levels without any medication, simply by using monitoring tools in conjunction with online coaching from their doctor.

Thanks to precision medicine, we will soon be able to measure so-called “biomarkers” in our bodies, which will enable us to read biological processes in our bodies and from them diagnoses and prognoses, e. g. from our breath. Such tools are already available today, and thanks to them we will soon be able to detect certain types of cancer, such as lung cancer, at a very early stage. And if we detect cancer much sooner, we can treat it much earlier. That also means an insurance provider could save money for their organization and their customers by identifying diseases at a stage where treatment is less costly.

It is important to recognize that as technology’s role in the health sector expands as a result of increased capabilities, many things are subject to change. That does not mean, however, that the roles of humans will disappear as much as they will transform. Some researchers have started to train robots and AI systems to mimic empathy. But can we seriously believe a robot will over-perform humans when it comes to delivering bad messages? Or do you really want us to hear from a robot that I have 7 months and 5 days and 3 hours to live?

It is time we start to actively lead and design our future healthcare systems, so we also have time to redefine the value system that healthcare is based on. It’s up to all of us to define what future we want. These new value systems should focus on activities that won’t particularly be done better by machines.

To read more from Bart, you can find the latest on his Medium page, or follow him on Twitter.