Genius, the online knowledge base, earlier known as Rap Genius, enables annotations and interpretation of ‘song lyrics, news stories, primary source documents, poetry, and other forms of text, by breaking down text with line-by-line annotations, added and edited by anyone in the world.

Founded in 2009 by Yale graduates,  Mahbod Moghadam, Tom Lehman, and Ilan Zechory, Genius, has now come up with another trick : a new genius.it/ prefix that allows the user to add annotations to any web page, throughout the internet.

“Only a handful of people know that the web browser’s big missing feature—the feature that was supposed to be in from the start but didn’t make it—is the ability to annotate any page on the Internet,” says Genius.

Co-founder Ilan Zechory told TechCrunch: “At an infrastructural level, we’re trying to change the way reading and writing takes place on the Internet.” 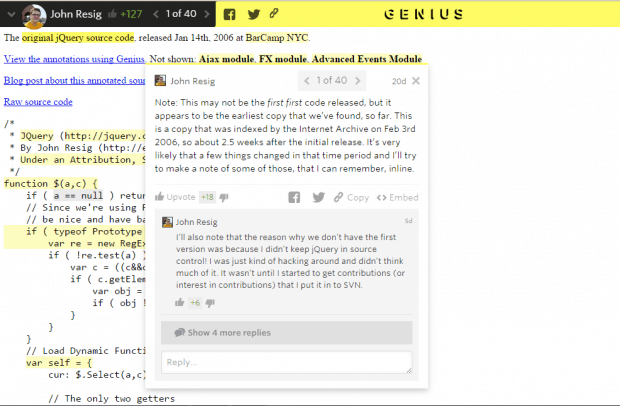 Screenshot of Genius at work on the original JQuery source code.

“There’s been a big sea change from the printed page to the screen. We can make any flat text more interesting, more interactive, and more fun,” he added.

All the user needs to do is add the prefix before a URL, select any text or image and add or edit a back story, explanation, context, or extra links, points out TechCrunch. Users visiting the genius.it/ can view the annotation, and upvote or downvote it, reply, or share the annotation.

Released late last night, Genius has rolled out a Chrome Extension, Bookmarklet, and a new version of its iOS app.