“FinTech is a mission to change the finance sector from its current state as a monopoly, to a more democratic, transparent sector that really serves customers. I wouldn’t want to be anywhere else, least of all, the traditional finance sector!”

CEO of Kantox, Philippe Gelis, expresses a kind of FinTech manifesto that’s sweeping through tech and finance. It can be heard echoing through the halls at young startups, filling headlines in the media, and even being whispered behind closed doors at major banks and investment firms (Gelis confirms that plenty of young people from Goldman Sachs and more have contacted him about job opportunities). The FinTech forces are alive and strong, and many former banking officials are leaving steady salaries and flocking toward the fledgling startup life – in the name of innovation (or so we think). But what’s really behind these forces, and do they have the power to last for years to come?

We recently polled our audience in hopes of gaining a better understanding of the FinTech allure – as in, why people are entering into FinTech, and how they feel the growing industry is perceived. We asked:

A 50% majority of respondents named opportunity to impact an emerging industry as their highest motivation for working in the sector. This was followed by build and own a financial product (17%), enable or develop technological advancements (13%), high potential financial return (13%), more positive outlook for the job market (1%), and other (1%). 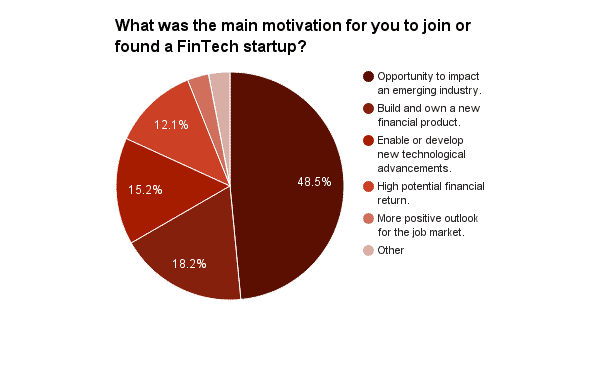 When asked why they believe others are getting into FinTech, poll respondents selected more selfish reasons overall. The majority chose build and own a financial product, and high potential financial return ranked second. 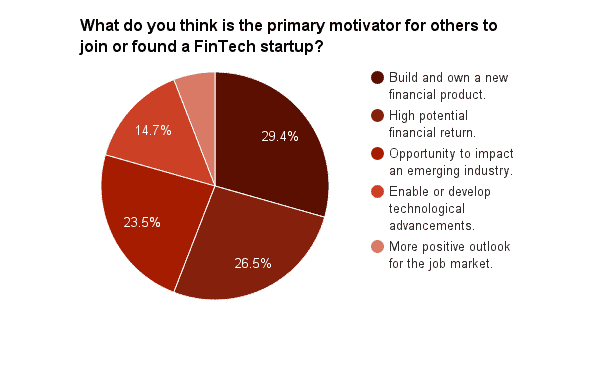 Nevertheless, in both polls, the top two results were opportunity to impact an emerging industry and build and own a financial product – both of which signal an important bottom line: the FinTech space offers freedom and potential that the traditional finance sector does not. Co-founder and managing director at FinTech startup Savedo, Steffen Wachenfeld, views FinTech as a dynamic realm with multiple attractive qualities for top talent. “Individuals have a substantial impact, can see the big picture, and personally benefit from the success of their ventures,” he says.

Renowned finance reporter and FinTech expert Elizabeth Lumley was first drawn to FinTech’s potential to change the industry after being invited to a payments hackathon at the Google Campus. “I went along. I paid for my beer, via a Tweet. I saw people I knew, people from banks – who’d paid for their beer, with a Tweet. I thought ‘something is changing’ and it has very little to do with anger over the 2008 crisis. It is deeper than that. And I want to be a part of it…So I started writing blogs,” she says. She’s had a hand at spreading knowledge within the field ever since.

Although new ideas and a revolutionary mindset are giving FinTech important momentum, the movement’s foundation isn’t without its weak points. The majority of poll respondents believe that outsiders view FinTech as innovative, much needed modernization for an archaic industry (39%), but a good chunk of them think the rest of the world views it as overhyped, not a “revolution” (23%). Part of the latter might be attributed to entrepreneurs hastily approaching an industry about which they have almost zero knowledge – which can be a recipe for failure. 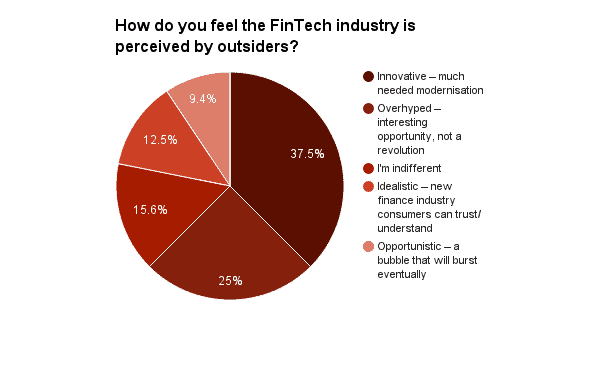 Lumley never quite bought into the disruption narrative taken on by startups within the sphere for this very reason. How, she wondered, could founders sink the banking battleship without even understanding what it was made of? Now, she sees the potential for FinTech, but strongly advocates founders to develop a solid knowledge of how banking and financial services operate. “Those are the people I think will survive and have companies that will last past the seed funding stage,” she says.

To others, FinTech is simply the means to provide the financial sector with much-needed digitization. “While most industries are pretty much done with the digital revolution (music – Spotify, ebooks – Amazon, dating – Tinder, etc.) banking and financial services still have a huge potential to offer digitize services,” says Anna Friedrich, Head of Communications at Kreditech. In this way, the FinTech manifesto turns less anti-banks and more pro-consumer. Instead of being a competitor or enemy of banks, it’s generating positive interest across the board.

“In the end,” says Friedrich, “FinTech is to banks what Spotify was to the music industry in 2007.”