by Eileen McNulty
in Data Science, News
Home Topics Data Science
Share on FacebookShare on TwitterShare on LinkedInShare on WhatsAppShare on e-mail

Cray, the supercomputer manufacturing giant, has cracked a $128 million contract with the United Kingdom Met department in its largest ever deal outside of the US, significantly bolstering its presence in the global weather and climate community.

Met Office Chief Executive Rob Varley noted, “It will lead to a step change in weather forecasting and climate prediction, and give us the capability to strengthen our collaborations with partners in the South West, UK and around the world. The new Cray supercomputers, together with improved observations, science and modeling, will deliver better forecasts and advice to support UK business, the public and government. It will help make the UK more resilient to high impact weather and other environmental risks.”

The Seattle based company announced the setting up of multiple Cray XC supercomputers and Cray Sonexion storage systems for the Met department with current and future Intel Xeon processors, in a three-phase process spanning multiple years, providing 13 times more supercomputing power than its current systems. The Met Office will use its new Cray supercomputers and storage systems for operational weather prediction and climate research. 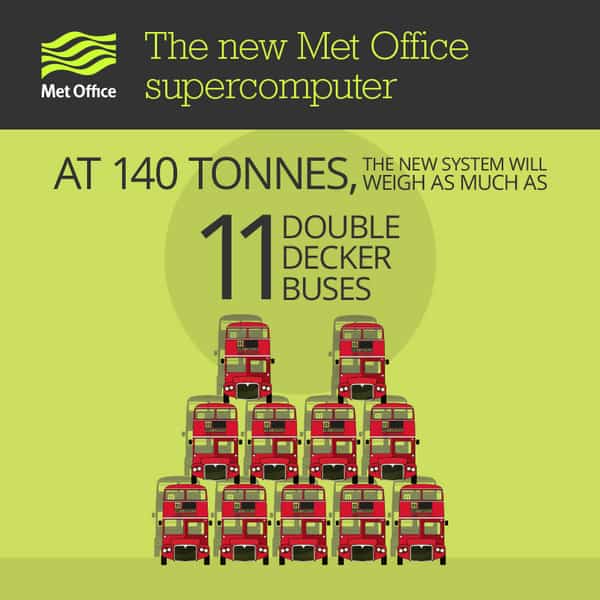 The next-generation Cray Sonexion storage solution will be delivered in phases and, all total, will include more than 20 petabytes of storage capacity, running at speeds of more than 1.5 terabytes per-second of bandwidth. Cray’s Sonexion storage system combines Cray’s Lustre expertise tightly integrated in a unique design that allows for maximum scalability. Management and operations are simplified through an appliance design with all storage components including software, storage and infrastructure.

The Exeter-based Met Office, recognized as one of the world’s most accurate forecasters will utilize the new machines for making the usual 10 million weather observations a day and an advanced atmospheric model to create 3,000 tailored forecasts and briefings each day that are delivered to customers ranging from government, businesses, the general public, armed forces and other organizations.