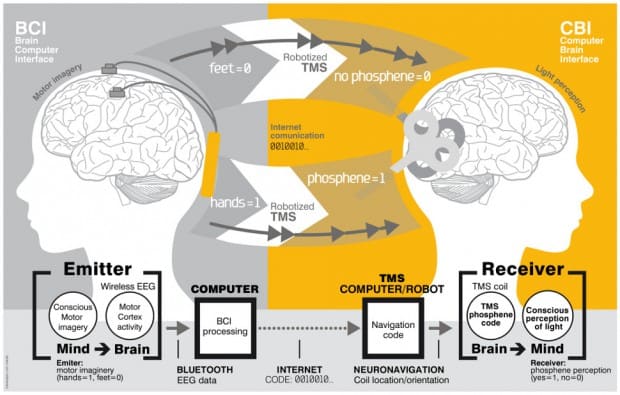 In a landmark scientific breakthrough, an international team of neuroscientists has been able to carry out ‘direct and non-invasive brain-to-brain transmission of information between humans,’ sitting 5000 miles apart, between India and France.

Alvaro Pascual-Leone, MD, PhD, director of the Berenson-Allen Center for Noninvasive Brain Stimulation at Beth Israel Deaconess Medical Center and Professor of Neurology at Harvard Medical School explains, “We wanted to find out if one could communicate directly between two people by reading out the brain activity from one person and injecting brain activity into the second person, and do so across great physical distances by leveraging existing communication pathways.”

“One such pathway is, of course, the internet, so our question became, ‘Could we develop an experiment that would bypass the talking or typing part of internet and establish direct brain-to-brain communication between subjects located far away from each other in India and France?’”

Researchers from Harvard Medical School teaching affiliate Beth Israel Deaconess Medical Center, Starlab Barcelona in Spain, and Axilum Robotics in Strasbourg, France, utilised a combination of ‘internet-connected electroencephalogram and robot-assisted, image-guided transcranial magnetic stimulation’ to transmit the words the words “hola” and “ciao” from one human to the other.

Although limitations exist such as the speed of this transmission, the researchers believe this to be an important first step in exploring the feasibility of complementing or bypassing traditional means of communication, with possible applications in varied fields of healthcare and defense.

The complete story can be read at the journal PLOS One.