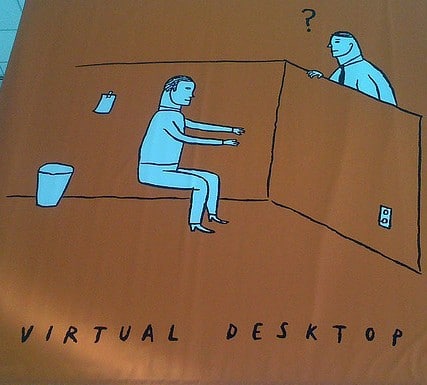 Few things have revolutionized the business landscape quite like virtualization. What began as groundbreaking new technology available only to the largest corporations and the most technologically savvy employees is now within reach of even the smallest businesses with only a passing knowledge of electronics. At its simplest form, virtualization is the process of creating virtual machines and placing them on a piece of hardware. This can happen in various forms where companies can virtualize storage devices, servers, networks, and desktops. There are many reasons to utilize virtualization, but one that is perhaps the most cited is the promise of cost savings. The more small businesses look into it, the more they’ll see the way virtualization can save them money.

One of the main points behind virtualization is taking physical machines and turning them into virtual ones. In other words, it reduces the pieces of hardware a company needs to purchase. For reasons that can be easily seen, this can end up saving companies a lot of money. If a company is acquiring a large number of new customers and needs a new server to help their business operations, instead of going out and buying the needed equipment, the company can use virtualization to create a virtual server, saving on the cost of the new hardware. Virtualization essentially allows companies to add more to their organization without actually adding any new equipment. This consolidation also means companies can use older pieces of equipment for a longer span of time.

Using fewer pieces of equipment may save money simply based on fewer purchases, but another way to save is through reduced energy costs. Simply put, if you have fewer machines, you’ll need less energy to run them. Things like servers, storage units, and desktops can use a lot of energy, so consolidating these pieces of equipment can end up saving companies a lot of money over time. One company was able to save 77% on power costs simply by running virtual machines instead of buying new servers. If that weren’t incentive enough, it also costs less to cool the equipment. Hardware like servers not only require energy to run, they need energy to keep cool or risk overheating. A server room filled with dozens of servers can end up using a lot of energy just to keep everything at the optimal temperature. Reduce the number of machines by half or more, and the energy required to cool them would be drastically reduced, meaning a more manageable energy bill and a more environmentally friendly business.

Consolidating multiple machines into one piece of hardware not only keeps energy costs low, it allows for easier and cheaper maintenance. IT personnel have a lot on their plate these days, so anything that makes their jobs easier is a worthwhile investment. Virtualization can take all these different pieces of hardware that need to constantly be maintained and monitored and centralizes their operation, making those tasks much easier to manage. With fewer machines to worry about, fewer IT staff will be needed, and any emergencies that need a rapid response will be tended to much more quickly. There will also be better support, and upgrades and patches are easier to use, meaning businesses will be on top of the latest developments, downtime will be reduced, and there will be more cost savings.

One of the costs that few business leaders want to think about is what is accrued when a security breach hits an organization. Securing all a company’s systems and networks can be an immense challenge, but it’s one that’s made easier through virtualization. Overall security can be greatly improved because IT workers have fewer machines and a smaller infrastructure to manage and monitor. Any threats that are detected can be dealt with quickly and efficiently. Virtualization can also isolate machines and networks from each other, meaning if any system does get infected, the chances of that infection spreading to the rest of the infrastructure is minimal. In terms of security, while the cost savings may not be up front like in the other examples, preventing security breaches is a necessity for those companies wanting save money in the long term.

With virtualization technology now a realistic option for small businesses, the chance to save on costs is certainly an enticing one. Adopting a virtualization strategy is not necessarily an easy task, but most companies will say it’s worth it in the end. To have a more flexible, productive, and efficient business, virtualization is a worthy strategy to pursue, and cost savings are just one part of why it is so successful.