Countless words have been written in recent years about the rise of the ‘gig economy’. As the natural evolution of the freelance model, the gig economy is based on short-term and temporary jobs handled by contractors and other independent workers. Instead of hiring full-time staff, freelancers offer a concise way to accomplish a business goal without the massive overhead.

On the other side of the equation, gig-based work lets freelancers exert greater freedom and control over their time and finances. Moreover, it forces independent workers to broaden their skill sets if they want to continue finding work. Though the traditional 9-to-5 job is still the norm, more young people are abandoning the trappings of their parents’ lives and disrupting the labor market in a decidedly modern way.

As technology evolves, finding paid freelance work has become increasingly simple. With major platforms that centralize the marketplaces for new gigs, finding freelance work and workers is made easy. However, the current system is not without its flaws. High fees, lack of transparency, and sometimes restrictive policies that work against freelancers are problems inherent in the centralized gig marketplace.

Even so, the rise of blockchain could start a new and better chapter for freelancers and the gig economy overall.

One of the biggest appeals of blockchain is its decentralized nature. The technology, which was created as the backbone for bitcoin, uses a mesh-like network of nodes to process transactions and operations, creating blocks of information that are appended together and tracked on a ledger that is updated simultaneously across every node.

This ledger is a major breakthrough, as it offers an incontrovertible and tamper-proof record of every transaction made on the chain, creating opportunities to track a variety of processes beyond simple payments. Ethereum’s contribution in creating smart contracts paved the way for blockchain to leave bitcoin behind and enter the mainstream on its own strength.

Blockchain’s architecture does away with the current paradigm for data and systems management. Instead of keeping all the data related to products and services on a single server, blockchain-based systems spread this load, so no one point in the network can gate off information or alter data without being noticed. Additionally, the ledger can be used with smart contracts which offer automated, performance-based agreements that can be used to create new jobs, products, and platforms.

Most importantly, blockchain-based businesses can add incentives for users to actively participate by extending their own cryptocurrencies and tokens, which can be used in the same platforms, or exchanged for different coins and even fiat currency.

Blockchain, and especially smart contracts, is particularly relevant for freelancers as it offers a third way between finding jobs and avoiding the pitfalls of centralized gig marketplaces. Using these two technologies in tandem, startups have already started working on new platforms that allow freelancers to connect with the people who require their services and do away with many of the restrictive practices current websites have in place. 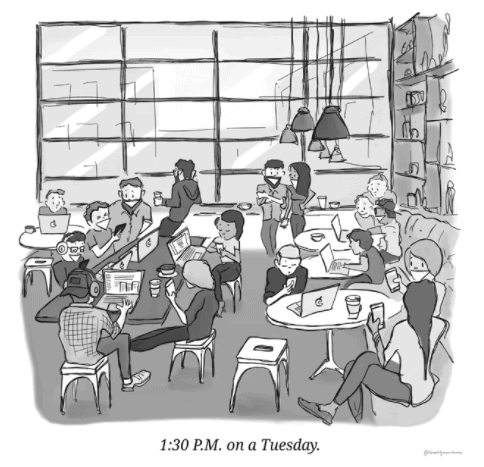 Changing The Way We Find Gigs

The main selling point for a blockchain-based freelancer marketplace is control. For gig-seekers, traditional platforms such as Fiverr and Upwork offer a two-edged sword. On one hand, these sites offer an easy way to find and accept work without worrying about not getting paid or fake postings. On the other, these companies tend to charge heavy fees and can be skewed in favor of employers in cases of arbitration. The problem lies in the centralized nature of their services as the platforms are designed to maximize shareholders’ value.

Instead of seeking to control all aspects of the freelance process, blockchain allows users to take charge and directly offer their services with no middlemen who take fees from payments or limit how users can find or offer out gigs. Thanks to the open ledger, transactions don’t require a central location to be stored, but can be instantly distributed to all points in the platform. More importantly, payment is also simplified as users can pay and be paid in platform-specific tokens, major cryptocurrencies such as bitcoin, and in some cases even fiat currency.

There are already examples of how such a service can work for the benefit of gig-workers. CanYa, a blockchain-based freelancer marketplace, offers workers in all industries—from developers to dog-walkers—the ability to offer out their services and receive without concern. CanYa and platforms like it also rely extensively on smart contracts to enforce agreements for workers. While it may not seem as important, these automated agreements are more likely to protect both parties, as human interference is limited, and contracts are executed only if conditions for success are met.

“CanYa is less a traditional freelancing platform, and more an overcharged community noticeboard, with the added bonus of transactional safety. To understand the broader implications of this project, one must look away from the online world of specialist freelancing and focus on the gig economy as a whole,” wrote Nic Mattock.

These blockchain-based gig marketplaces are quickly expanding. Companies such as Blocklancer, which focuses on the smart contract side of the equation, and CanYa, are also taking things one step further by integrating all the ancillary services freelancers and their contractors need. Payment processing, matchmaking, and even mobile applications that simplify the process make finding a gig and getting paid a straightforward and easy transaction.

Blockchain is taking the technology world by storm. More new use cases emerge every day and freelancing has already seen the fruits of embracing change. With blockchain’s decentralizing influence and the usefulness of cryptocurrencies as payment instruments, freelancers can be more in control of their income, work, and opportunities than ever before.

While the old systems are likely to fade away soon, these new blockchain-based marketplaces are quickly becoming more popular, and they will only grow more successful and effective as new users are onboarded. It remains to be seen what impact these new companies will have on the gig economy, but it’s hard to argue it will not be a big one.