How a Database Can Make Your Organization Faster, Better, Leaner

Organizations spend too much time and money on databases — over $40B per year — and still more on the resources required to manage them. Learn how organizations are solving this problem with MongoDB. In this whitepaper, you’ll learn: Success stories of large enterprise customers, such as MetLife and Telefonica,

Bringing Hadoop to the Masses

Gerd König is a Data Engineer and instructor for YMC AG. YMC is a specialized service provider for web technologies, providing consulting, creation, custom development and safe (highly-available) hosting, as well as operations and maintenance services for online projects. Dataconomy recently sat down with Gerd at Berlin Buzzwords to discuss

Warning: The following post contains moments of wild speculation. You have been warned. Right now is an interesting moment in the history of civilization. In the past technology has molded itself to the needs of society, but we’ve passed that point. In the last 15 years we’ve started to see

The past few weeks have seen Facebook under fire over the announcement that it has been running secret “mood altering” experiments on members. In summary: their technology has allowed them to alter the content displayed to members in a way that elicits a measurable emotional response. While the revelations were

Twitter has released a tweet analysis of online activity during the penalty shootout of Brazil vs. Chile quarter final face-off. The last penalty kick sparked the highest rate Twitter activity in a single minute seen during the World Cup, with 388985 TPM. “However,” the Twitter blog post points out, “sometimes

This week we reported on more fall-out from the Facebook “mood manipulation” experiment revelation, some expert advice from Big Data legend Doug Laney, and continued our coverage of Big Data’s use in the World Cup: TOP DATACONOMY ARTICLES Understanding Big Data: Cross Infrastructure & Analytics In this edition, we’ll be

Big Data – Bigger Challenge The volume of net new data being created each year is growing exponentially — a trend that is set to continue for the foreseeable future. The higher the volumes of data get, the more complex data becomes, and the more challenging it gets to generate 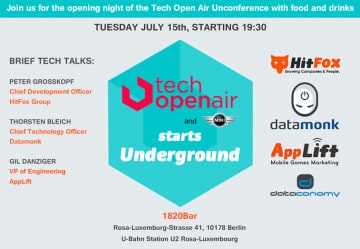 On the 16th and 17th of July, Berlin will once again be overun with pioneers from the creative and technological industries for Berlin Tech Open Air Festival 2014. TOA is Europe’s first interdisciplinary festival, attracted 2,500 guests and 150 speakers and acts to Germany’s capital. But the fun doesn’t start

Over the past few years, music subscription services have seen incredible growth, with revenues up by 51 percent in 2013 and the $1 billion threshold crossed. In contrast to that, over a decade of stagnation has seen Europe’s overall record sales grow by just 4.3 percent. Undoubtedly, services like Spotify,

The Dataconomy Newsletter is a weekly round-up of all of the major data science and AI happenings of the last seven days, sent every Friday. We include top articles, significant news stories, interviews with industry leaders, events, and much more – all delivered straight to your inbox so you don’t

How a Database Can Make Your Organization Faster, Better, Leaner