Women in Data Science: “We built a conference to become a movement”

2018 has brought a new focus to the careers, excellence and issues of working women, and this extends into the fields of tech and data science. As we approach the Women in Data Science (WiDS) conference on March 5, 2018, it is important to take a moment and reflect on where women are now in data science, and where they need to go. Dataconomy’s MD and WiDS ambassador Berlin, Elena Poughia, sat down with Ann Rosenberg, Senior VP of SAP Next-Gen, and Alexa Gorman, Global VP of the SAP.io fund to discuss this topic.

Both Rosenberg and Gorman are leaders at SAP who are empowering each other and other women in tech and data science. As leaders, they recognize the importance of their unique philosophies and mindsets.

“When I moved to the United States a couple of years ago after many years working in my global role from Denmark, and I began to have my team more closely around me, I began to see how women around me were treated,” said Rosenberg. “It was a very interesting observation because it’s not like I haven’t had my challenges as a woman. But I never thought about it in the mindset that it was because I was a woman. I originally thought when I was challenged by men, they were just smarter than me. My philosophy is that you should be who you are and you should treat everybody like a human being… with respect.”

Gorman promotes the empowerment of her teams in order to allow ideas to flourish. “I believe strongly in empowering teams to take decisions, we have a small team here that can make decisions and try new things”, said Gorman. “You have to weigh out the risks – and empowerment is really important to me.”

Both women are mission driven and have managed to make a difference through their work. Rosenberg has been leading the SAP University Alliances and from 2012 to 2017 the number of educational institutions in the SAP University Alliances program increased from 1,300 in 70 countries to 3,360 in 112 countries. In 2016 Rosenberg introduced SAP Next-Gen as a purpose driven innovation community connecting customers to academia, startups, accelerators, and purpose driven partners. “Today there are 72 SAP Next-Gen Labs and hubs at campuses, accelerators and SAP locations, and a new lab opens every second week in locations all over the world,” shares Rosenberg. 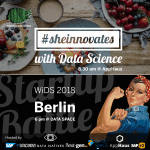 In data science and tech, the need for women is clear and apparent. Luckily, the field is still being explored, so women have the opportunity to become pioneers.

“In areas like AI that having more data scientists who are female will ensure that the algorithms and the data sets that AI is being trained on will better reflect the diversity in the world in general,” Gorman said. “Women are still underrepresented. 26%, according to a Forbes article of all data science jobs in the US are held by a woman, which is not representative of the population. A white male data scientist’s certain, potentially unconscious biases will be reflected in his AI solution. Women have a great role to play, and we can do a lot to get rid of biases or identify biases in AI.”

Rosenberg adds “The incredible conference Stanford puts together is something that we wanted everybody to be allowed to be part of and that is where together with the mission Stanford has, women in data science, and our mission the #sheinnovates program got developed. We built a conference to become a movement. In 2017 my team hosted 24 satellite events in 20 countries, and this year we are hosting 30+ events in 22 countries. You have women in those cities who can come to those events and be inspired by local leaders, local role models, local women, and you can listen to the incredible speakers of women in data science.”

When these women describe their individual programs, their voices noticeably get more excited. You can tell that they care about their work in empowering women to really want to achieve their goals. Both Rosenberg and Gorman are passionate about it, and it is the same passion that got them to where they are.

“We ran an accelerator program in San Francisco last year for women founded startups,” said Gorman. “It was really successful. We’re also running the program again this year. Actually, applications are open in New York for women-founded startups. At SAP.iO, we found that the quality of women-led startups is exceptional. It’s why we engage as much as possible with the community – through hosting and participating in events across the globe. We are very committed to promoting and supporting female entrepreneurship in general.”

Gorman adds, “There are so many innovations that are changing the world like space tourism and cryptocurrencies. Those are all fields not yet dominated by either gender. They present opportunities for women to position themselves or to take leadership roles. At SAP, in the blockchain space, we have amazing female colleagues who are true thought leaders. That’s the great thing about tech – there’s so new many fields and innovations that are popping up. We just need to want it.”

Mentorship is an important theme for both Rosenberg and Gorman. Each of them praises their mentors at SAP, male and female. “Building on the tradition of mentorship, we have launched the SAP Next-Gen Advisors initiative to connect experts in the SAP ecosystem to the next generation social entrepreneurs, developers, data scientists, makers, and tech founders to foster innovation with purpose linked to the 17 UN Global Goals while adopting the latest SAP technologies,” said Rosenberg.

“For me, it’s kind of like what I always have had, like my mother, who has been my mentor, my role model, the person who has given me the strength and trust and the belief in myself. That is what I want to give women around the world by building up the #sheinnovates program. It’s very much a go-getter kind of program. There are a lot of things we’re doing with the program, educating people, making sure people have a mentor and making sure people have access to technology,” said Rosenberg.

“I had some great male and female mentors along my journey from within and outside SAP,” adds Gorman. We have an incredible executive board member, Adaire Fox-Martin, and Chief Strategy Officer Deepak Krishnamurthy, who are exactly the kind of role models that I look for. They embody the organization’s culture and values. I am grateful for all my mentors and all the life-changing advice they gave along the way. We tend to get buried in the day-to-day activities and not think about the tough or uncomfortable questions, such as: where’s the next step? where do you want to grow?  and how do you plan to get there?’ What really helped me in my career is refocusing. If you don’t know where you want to go, you definitely won’t get there. If you know where you want to go, you’re at least going to get somewhere close.”

Of course, they’re willing to mentor other women and offer their own advice.

“If you want to change things, the first thing you need to do is understand what the change means for you and how you can contribute,” said Rosenberg. “We did a super cool exercise a few months ago and we were asked to pretend we were time travelling and make a postcard from 2030. Then you go back in time to 2018 and you explain to people what the world looks like. It was really cool because by doing that, you are actually committing yourself to what you would like the future to look like. That means you actually made a life mission for yourself. I have been doing this exercise with other people and it has had an impact on people because we as people only think two, three years ahead maximum, or half a year ahead. But 2030? If you are looking at 2030 you have to ask what you want it to look like and how you are going to contribute. “

“The advice I would like to give to female entrepreneurs is: be bold, take risks and keep a sky-is-the -limit mindset. Never take no for an answer,” said Gorman. 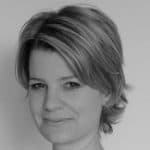 Alexa Gorman is the Global VP of the SAP.iO Fund & Foundry, working at SAP since 1999. She has held leadership roles in marketing, business development and strategy throughout her career at SAP, working with companies like Google, PayPal, and UPS. At SAP.iO, she works with investments in startups in Europe to accelerate their businesses. 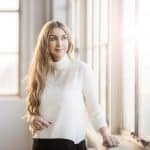 Ann Rosenberg is the Senior VP of SAP Next-Gen, an extension of SAP University Alliances and SAP Young Thinkers, which aim to connect young people with tech careers. She works with UN Women Global Innovation Coalition for Change which includes 25 companies, and hosts the UN Women Innovation, Technology, and Entrepreneurship Industry Forum at the SAP Leonardo Center in New York including speaking with UN Women at Davos, Mobile World Congress and South by Southwest. She is also the SAP woman executive sponsor of #sheinnovates, and the SAP Women in Data Science Ambassador. She was recognized as a Top Blockchain Influencer in 2018 by Women In Tech – Hot Topics and Tech Influencers.

The Women in Data Science Conference will be held on March 5, 2018 at Stanford University. You can register for the event here.

Dataconomy and Data Natives is a partner for corresponding events in Berlin on March 5. You can still register for the breakfast and the panel!