Collaboration and innovation go hand in hand, and are based in transcending frontiers – physical, technological, economical, you name it. Open innovation is one of the ways in which Europe can secure global competitiveness. The H2020 research and innovation program is the EU’s financial instrument to achieve this, and within this framework, the IoT-European Platforms Initiative (IoT-EPI) was formed to build a vibrant and sustainable IoT-ecosystem in Europe – one that is based on interconnectedness.

In March 2017, the IoT-EPI met for one week in Berlin, to attend business-building and community-building workshops, to share their projects with the Berlin tech and startup scenes, to host the IoT-EPI challenge 2017, and to strengthen the bonds of this growing network in its effort to unify a very fragmented European IoT platform ecosystem.

Berlin has been one of Europe’s most attractive destinations of the 2000’s. It has become synonymous with avant-garde art, electronic music, and a flourishing startup scene. What it is not synonymous with, however, is well-functioning infrastructure – at least when air travel is concerned (definitely hinting at the infamous BER-airport project here.) Because of an ill-timed airport workers strike in Berlin, a considerable part of the IoT-EPI members were not able to make it to the first meeting days. However, even though the group was smaller than planned, the first workshop days turned out to be very productive. The second part of the week (the Meet & Greet, and the Challenge) went on as planned.

IoT is about connecting 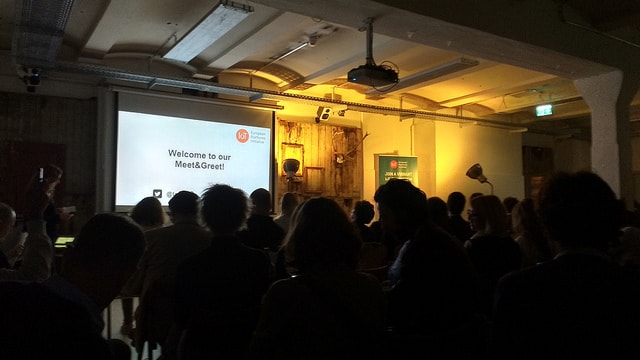 Media outlets, startups, SMEs, and corporates met at Ahoy! for this IoT-EPI Meet & Greet, to get to know the initiative and learn about its projects. Laura Kohler, etventure Startup Hub’s Managing Director, set off the evening with a talk that went to the core of the problem of the siloed IoT platform ecosystem in Europe, and that clearly showed the importance of IoT-EPI’s mission – IoT platforms help organizing an increasingly connected world, but they are not connected amongst themselves. Because there can’t be a one-size-fits-all solution for all the existing and upcoming platforms, collaboration is key within the IoT space, in order to create an ecosystem where platforms and services can talk, and thus connect the world.

“An IoT ecosystem based on interoperability and communication can be the driver of truly smart cities, and a connected world”

Startup pitch coach Bianca Praetorius took the stage from Laura, to give attendees a clearer picture of the stakeholders of the European IoT ecosystem, in the form of 10 archetypical figures in the space. From The fresh out of university founder to The EU funded R&D project, she highlighted the labyrinthine network of symbiotic relationships within this very interconnected space. Her talk led the way to the more lighthearted part of the evening. 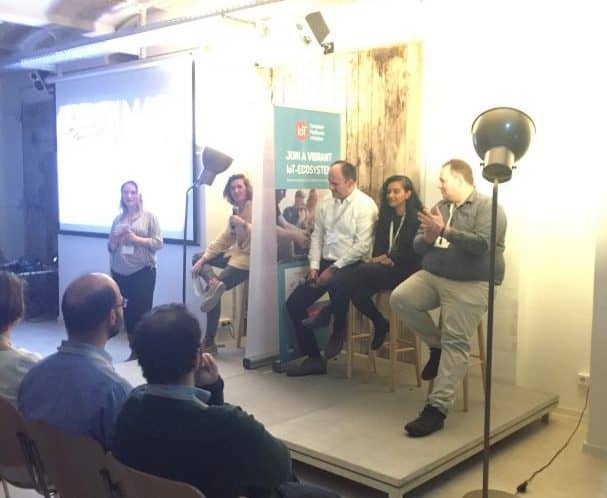 Drawing inspiration from the long-running German dating show Herzblatt, IoT-EPI took on the task of matching innroute, a logistics startup from Barcelona, with a partner that could help reach the next stage of development as a company. The three candidates were an innovative corporate partner (Deutsche Bahn), a VC (Videesha Kunkulagunta), or a mentor (Srdjan Krco, project coordinator of the IoT-EPI project TagITSmart!). Depending on how the candidates answered the questions innoroute posed, one of them would be picked to work closely with the spanish startup. After the candidates answered questions about building and ending working relationships, market fluctuations, cooperation, and other key aspects of a business cleverly disguised as romantic issues, innroute saw themselves in a crossroads. How do you pick only one out of three promising candidates? Eventually, the startup saw a perfect match in Deutsche Bahn.

IoT is about sharing

BIG IoT // big-iot.eu
This project is a seven-partner network with a team of around 40. Their aim is to create an API and a marketplace for IoT data and platform providers to serve as a one-stop-shop for monetizing, finding and acquiring IoT data & platforms for IoT projects. They focus on the smart mobility space, but decided to try something different in the IoT-EPI challenge, and went for the Retail challenge instead.

AGILE // agile-project.eu
Agile is building a gateway to control data sharing (in the cloud), that supports protocol interoperability, device and data management, design and execution of IoT apps and external cloud communication. In a nutshell – building an architecture to support communication between IoT devices

INTER IoT // inter-iot-project.eu
InterIoT is a partner network of 14 universities and big TelCos. Their goal is to build an open framework to integrate new and existing IoT platforms, enabling voluntary interoperability among IoT platforms and across multiple layers – from devices, through middleware to a semantic layer. In layman’s terms – On one hand, they’re building bridges between IoT platforms, so they can communicate; on the other, they’re also building the tools for others to be able to build these bridges between themselves.

bIoTope // biotope-project.eu
bIoTope is leveraging the know-how of their 20 partners, to lay the foundation for open innovation systems to enable horizontal interoperability across IoT systems. As they described it during the meet and greet, basically, they’re offering “everything-as-a-service”.

TagITSmart! // tagitsmart.eu
TagIT Smart create smart tags for retail products, to enable ecosystems of connected products that are otherwise still out of reach due to technological limitations.

VICINITY // iot-epi.eu/project/vicinity
The VICINITY project will build and demonstrate a platform and ecosystem that provides “interoperability as a service” for infrastructures in the Internet of Things. Unfortunately, the project was not able to be present at the IoT-EPI Week because of the airport strike.

The projects welcomed visitors from large, innovative institutions like BMW, EnBV, and Siemens, to discuss their work, their goals, and to talk about finding ways to build the strong ecosystems and communities that an interconnected European future needs. For BIG IoT, interconnectedness takes on a very physical meaning. With an emphasis on smart mobility, the BIG IoT project is conducting 2 open calls to enable external organizations to join the project with their own ideas and contributions, within a larger IoT-EPI program of 11 open calls, offering funding totalling €5.5 million.

What’s there to win? Aside from getting to work within the BigIoT ecosystem, they are offering a total of 750.000 € for new partners, taking on the role of either IoT service, application, or platform providers.

The first next open call, by BIG IoT, starts in April 2017. It will focus on IoT platform & service providers who are willing to provide new data to the project through the BIG IoT API and offer the data on the BIG IoT Marketplace. The second open call will be published in January 2018, targeting also IoT applications providers. Head to BIG IoT’s website to fill in the application form, and to get more information on the project and specific details about the open calls.

IoT is about challenges 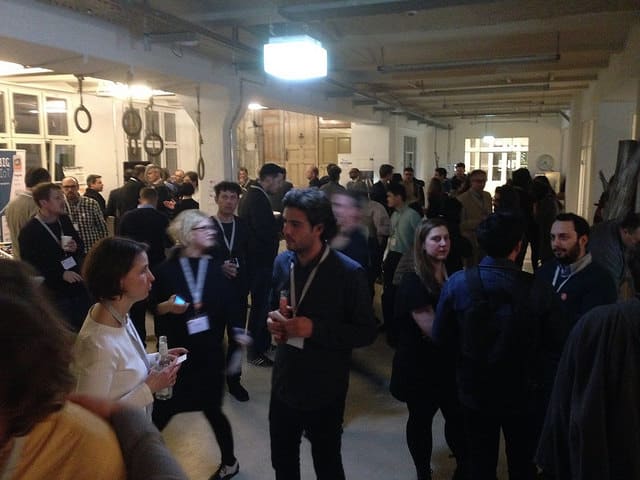 The lively networking session was far from the end for this IoT-EPI week. As the evening drew to a close, everybody’s eyes were on the following day and its prize. On the next blog of the series, we’ll share our impressions of Friday’s IoT-EPI Challenge 2017, where 12 teams from all over Europe got together to find the IoT solutions of the future.

What Does Trust Mean in IoT? - IoT-EPI Challenge