by Elena Poughia
in Conversations, Data Science, Startups, Technology & IT
Home Conversations
Share on FacebookShare on TwitterShare on LinkedInShare on WhatsAppShare on e-mail 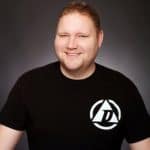 Amal Graafstra is a double RFID implantee, author of the book RFID Toys, and TEDx speaker. His interest in biohacking, RFID, and NFC began in 2005 as a simple solution to a problem. He wanted easy access to his office. He explored biometric options only to find they were too expensive, klunky, and vulnerable to vandalism. Graafstra has been active in the DIY RFID implant scene since the mid-2000s. His custom gadgetry company Dangerous Things’ mission states that “biohacking is the forefront of a new kind of evolution.”

Why did you start Dangerous Things?

In 2005 I was really frustrated with my key situation. I was really upset that I had to carry all these keys around and it seemed pretty lame, I wanted the door to just know that it was me, I didn’t want to use some kind of iris scanner, fingerprinting, I looked at these technologies and they seemed robust particularly around door solutions, you know you have a sensor like that, it’s pretty expensive and you put it outside and a kid whacks it with a stick…it doesn’t work.

RFID technology seems to be the logical solution but you’re exchanging a metal key for a plastic card, the promise of RFID is that you have one card that works with all your doors but in reality access control manufacturers want to build-in proprietariness so you have to buy tags from them so you could have something that technically works for all doors but then you end up with a bunch of tags, like a key ring with keys so it’s so stupid. So I’m like you know what, I’m gonna build my own and I’m gonna get an implant. Then I don’t have to worry about carrying a card. So I did some research I looked into it and decided not to get a pet implant for a couple of reasons and then did find the right kind of chip that I wanted, and the right kind of glass and talked to some doctors who were clients of mine, I said ‘hey what about putting that in here?’ And they were like ‘yeah that’s cool’. So I bought the tags, in 5 minutes it was in, done deal.

That was pretty much it but then in 2008, 2009 maker revolutionary hit, people started making their own electronics again, and really getting into it and RFIDs are a big part of hobby electronics and a lot of people got interested in implants and it was too difficult to manage without a structure around it so I started dangerous things and now we sell safe materials and we partner with professional body piercers to allow our customers to go there and get a safe implant.

Do you come from an engineering background?

No. I like technology. I can code but not well, I can build hardware but not well. I know a little bit about business but not much. I’m a jack of all trades kind of person.

You can build a lock mechanism pretty easily or you can buy one, Samsung makes a door lock and a bunch of other companies make door locks, but then if you want to get into something a little more complex like starting your car or something like that you have to know a little bit of electronics to modify the car. When it comes to stuff like payments it’s more of a partnering and people issue than a technical one. You’d have to have the right permissions, the right security on your devices etc.

What about the core mission of the company?

We haven’t really developed a core mission statement, but it really comes down to the idea of upgrading your body directly, either by hardware installs or tinkering with the genes. That kind of thing is really the next form of evolution and we believe that the future of humanity is to direct one’s own evolution. Evolution is two things, it’s random mutation and selection. Random mutation 99.99% of the time is bad. A baby get born with some defect and the baby dies. That’s selection. But we’ve been acting out on that selective process and surgically save the baby’s life. However we haven’t changed the problem which is the bad gene, so being able to guide evolution in a non random way is really what’s interesting there.

Do these devices collect data?

The devices are not connected, actually the only time they are even powered is when they’re in the range of the reader. So there’s no data collected. In the future when we’ll have a safe power storage cell then we can talk about collecting bio-data and aggregating that data, doing more things with them. But for now it’s more like an information exchange. For example we have a tag that has a thermal sensor on it, so you can get the temperature but it only records temperature when you’re asking it for temperature.

Are there challenges about the product?

There’s no moving parts, there’s no reason to think they will break. I have this for eleven years. So they are different limits I guess. Some models have a memory of ten year data protection. So if you don’t write anything, the device will keep the data for 10 years but if you write something it’ll be reset at that time. There’s also a 100.000 cycle count on the memory blocks itselves so you can write to that memory 100.000 times. So even if you write once a day, every day it’ll give you around 27.9 years.

What do you think are our biggest digital problems?

Right now we have a problem. Our digital identities are becoming more valuable, even more valuable than our biological identities. You can’t go into the bank and get in your account without some kind of an identity system to identify you. Your body is not sufficient enough. So to be able to link online and offline identities is a big problem and it’s gonna get bigger as we rely more and more on online communications. That’s one of the primary focuses developing those devices.

Do you see this technology as a destructive force as well as a constructive one?

People are random odd things so there’s going to be chaos in any kind of endeavour. My hope is being able to unequivocally prove your identity in digital and online interactions is only going to be beneficial. Any kind of change if you look back through recorded history makes people afraid. So there’s always a period of acceptance, the same was true with the pacemakers.

The first pacemakers were condemned as the devil’s work. And slowly people started to accept it through understanding of what it’s doing and why it’s important. It’s easier for medical technologies to get acceptance because they are helping in a way that they seem to be critical and urgent. I think once we have a safe power source cell then we can start making all kinds of crazy devices. People have wanted bioelectric devices to monitor muscle movement, for example to activate a prosthetic, but getting a good sensory reading from outside the skin is very difficult. However being able to have an implanted device that can listen to muscle movement is very interesting. So that’s just one example. So there’s gonna be medical devices but also non medical ones, gesture controls for example. It’s that kind of capability that we’re gonna see through biohacking devices.

What kind of shifts do you see in biohacking in the future?

Again, once we have an active power cell and are able to have devices that are powered within the body, then data collection becomes possible and contributing to big data stream is going to be one of those possibilities. Wearables are interesting but a wearable is a burden to manage. They are inconsistent in collecting data because people don’t wear them all the time. So being able to establish a data connection routine through an implant device that’s always listening and always recording has more interesting opportunities for big data.