Cockroaches, Bees, Crickets and Big Data may just save lives

Since the 1700’s people have been studying insects and in the past decade, more research has been popping up on how insects are used in data science applications – and frankly, it’s pretty cool. From creating an alternative food source to city planning,insects and data go hand in hand in revolutionizing the way we live.

If you are still not convinced that bugs are cool to study, the National Wildlife Federation created several pamphlets (namely for kids, but we like how it’s simply laid out) explaining why bugs are actually quite good for society and that “out all of the animal species on Earth, 9 out of 10 may be insects.” And if you want to go one step further you can now listen to and see spikes of real living neurons in insects with a device called the Neuron SpikerBox – yes, this is real!

So, how can cockroaches save lives?

When most of us encounter a cockroach we panic and our focus turns to finding the most efficient way of killing that creepy crawler. A data scientist, on the other hand, sees the potential to help people. Why? Cockroaches in particular are designed to withstand immense pressures and due to their structure and movement can gain access to hard to reach or tight areas. Scientist at UC Berkeley recently designed a robotic prototype called CRAM which mimics the shape and features of a cockroach for these reasons. The two scientists behind the robotic prototype (pictured below) Kaushik Jayaram and Robert Full conducted several tests to provide evidence that cockroaches are quite indestructible and make an ideal muse for other applications.

An additional study was conducted by researchers at North Carolina State University. Researchers outfitted live cockroaches with “backpacks” which included a microphone.The idea behind using cockroaches again was to access hard to reach places such as buildings destroyed by natural disasters, namely earthquakes. These cockroaches or “biobots” (defined as “a technology that is part machine and part biological muscle”) would be inserted into damaged buildings to detect faint noises of people potentially stuck in the rubble in hopes of finding survivors and saving lives. This is just the first application of these biobots but there are sure many more to come.

Cockroaches are being used because their form and movement create ideal circumstances for getting into small areas whereas bees are used for their ability to indicate the health and livability of a city. In the past year, the possible extinction of bees and the detrimental impacts this could have on our society was a hot topic in the news. Scientists, conservationist and now data scientists alike have focused more on studying these insects due to their ability to be an indicator of environmental issues.

Bee colonies, more specifically beehives are complex systems which can be considered a good representation of a city. And so, taking a more data minded approach, Perelló, an Associate Professor of the Fundamental Physics Department at the University of Barcelona and Project Leader of OpenSystems UB specializing in complex systems and data analysis created the OpenBeeResearch Project. A study discussed in the Washington Post, explains that bees are highly susceptible to air pollution and ozone levels affecting their overall behavior and ability to pollinate. Perelló says that “bees can act as a biosensor for cities…” and so with the help of webcams, data science software and data analysis, Perelló and his team are monitoring bee activity in an open environment and tracking results that could indicate the health of the city and its inhabitants. 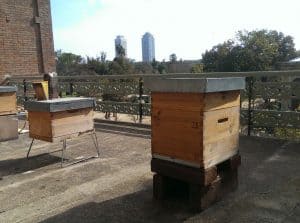 Since inception in 2014, the OpenBeeResearch project has collected more than 7GB of data and the researchers expect to use it to find correlations and high cause and effect phenomena on high frequency, daily and seasonal data. By doing so, Perelló and his team hope to gain an even clearer picture of the impact environmental variables have on bees and in the grand scheme of things, human civilization. Perelló stated that additional sensors to correlate bee behavior and environmental variables will be added this May to the hives, along with a webcam to allow for even more monitoring.

Another notable trend in the last year Is it last year is harvesting insects as a means for consumption and generally a source of protein. The act of humans eating insects known as entomophagy is widely adopted. According to article written in the Guardian, 80% of the world’s nation eats 1000 species of insects. The Food and Agriculture Organization (FAO) published a paper titled Edible Insects – Future Prospects for Food and Feed Security stating that “insect harvesting/rearing is a low tech, low-capital investment option…” So it comes as no surprise that startups like Exo, Chapul and Tiny Farms have been popping up and receiving a lot of interest and funding for their cricket flour and cricket bars. According to IoT Journal, Tiny Farms in particular uses IoT technology and sensors to build and optimize their scalable farms. CEO Dan Imrie-Situnayake also discussed that they collect a lot of data to determine “the best approaches to insect farming, pinning down what works and what doesn’t.” And given that it takes 25 pounds of feed to produce 1 pound of beef versus 2 pounds of feed to create 1 pound of crickets, by using data science techniques companies like Tiny Farms will be able to scale the production process of more viable and affordable food sources to alleviate potential future food scarcity.

With the advancement of robotics, IoT and data collection, data scientists are finding innovative ways to use and study the impacts and opportunities that bugs play in our society. So the next time you come face to face with one of these insects, think twice before stepping or swatting at it, as they may play a role saving a life.