This year we saw the next generation of aircraft powered by the capabilities of Internet of Things (IoT) and Big Data hit scales that have never seen before.

At last year’s Paris Air Show, we saw the latest state of the art aircraft sporting engines that are able to monitor up to 5000 elements every second, some of which are also capable of generating up to 10 TB of data per flight. In comparison, at the end of 2014, it was estimated that Facebook accumulated around 600 TB of data per day; but with thousands of planes in the air at any one time, there is the potential to download zeta bytes of data. It seems therefore, that the data generated by the aerospace industry alone could soon surpass the magnitude of the consumer internet.

Not only is more data created by industry than in the consumer world, it’s more valuable; validating the sentiment that not all big data is created equal. Instead, the data created by industrial equipment such as jet engines, gas turbines and MRI machines has more potential business value ona size-adjusted basis than other types of big data being generated from the social web, consumer internet and other sources.

For someone who has built engine health monitoring solutions on big data platforms and demonstrated a reduction in the processing time from days to minutes, working now with this volume of data has totally changed the game. These scales were beyond imaginable 10 years ago and the kind of data storage and computing infrastructure required to handle such data is truly mind blowing.

Questions could be asked around why so much data needs to be collected. Pratt& Whitney’s GTF engine uses great swathes of data to build artificial intelligence and predict the demands of the engine in order to adjust thrust levels. As a result, GTF engines are demonstrating a reduction in fuel consumption by 10% to 15%, alongside impressive performance improvements in engine noise and emissions.

Ultimately these Internet of Aircraft Things solutions lead to additional business for engine manufacturers, OEMs and even operators. Bombardier recently announced that it has signed an agreement with Pratt to use their eFAST Health Monitoring System on the CSeries aircraft. Bombardier can earn more revenue by receiving data on the real-time performance of their engines, so they can adjust the way planes are flown and take care of potential issues before they become real problems that end up grounding airplanes.

The other major players are also on the same path when it comes to embracing the Internet of Aircraft Things. The new generation of GEnx engines started pumping 5 to 10 TB of data per day. GE expects to gain up to 40 per cent improvement in factory efficiencies by the application of IoT and Big Data Analytics. Rolls Royce collects similar amounts of data from 12,000 engines across the globe is its data centres.

While engines are leading the charge and embracing the IoT and data generation, avionics systems are also having to catch up to this trend and do so quickly. Traditional avionics systems transfer data up to a maximum of 12.5 KB/s whereas Boeing 787 Dreamliners and A350s are using Ethernet based, next-generation aircraft data networks, called AFDX that allows up to 12.5 MB/s. This makes it quicker and easier to transmit the information from avionics systems to the maintenance teams on the ground about current flying conditions, as well as any faults that have occurred during the flight.

While avionics vendors have been slow to introduce big data applications, they are today increasingly open to these proposals. The Internet of Aircraft Things is also helping manufacturers manage their Pay by Hour engagement models and long term maintenance contracts at lower costs.

With rapid advancements being made in the Internet of Aircraft Things and data analytics, it’s a truly exciting time to be working in the avionics industry. Soon, thousands of sensors will be embedded in each aircraft, allowing data to be streamed down to the ground in real-time. And who knows, in time, this could drive the famous black box to simply become a backup device!

Bhoopathi Rapolu is the Head of Analytics, EMEA at Cyient. In this role, he is responsible for customer engagement, solution development and business development. He has over 15 years of experience in business Intelligence and technology management, and has spent the last few years evangelising about the integration of Operational Real-Time technologies with IT technologies. He has conceptualised and delivered intelligent asset management solutions powered by telematics and advanced analytics primarily for Aerospace, Transportation, Heavy Equipment, Utilities and Telecom. He has also built and run large BI systems and has delivered enterprise-level solutions for advanced functional and operational analytics platforms. 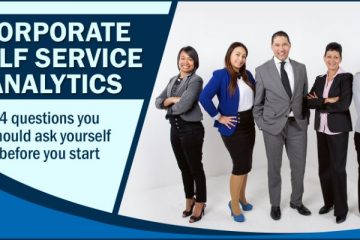 Corporate Self Service Analytics: 4 Questions You Should Ask Yourself Before You Start