There are rules every start-up abides by, and the FinTech arena has its own special set. These new companies simply must understand the start-up game as well as the legal quandaries specific to finances. Taking a walk through the FinTech graveyard provides educational, eye-opening, and sometimes fun new information.

A young start-up needs money to find its way. As a result, much focus goes toward raising funds and making deals. This seems obvious and logical; you can’t make money without spending money. Unfortunately, without the right plan, start-ups may just be throwing money at an idea. Founders need to be asking who will pay money for their final product. After they burn through their initial funds, where will they find more? While some freemium programs seem to work, the term “freemicide” wasn’t coined without reason. The goal is real customers and knowing what they want. Of course, not all of these customers will be typical, average Joes and Janes.

FinTech is one of the most interesting, and maybe inspiring, areas for tech disruption. “Down with the old and in with the new,” right? Except, many FinTech start-ups will be fulfilled through partnerships. As Houston Frost of Akimbo Financial explains, Dwolla, Simple, Moven, Akimbo, and other famous start-up heroes aren’t going it alone. The relationship between the disruptor and disrupted is completely different in the FinTech field in many ways.

“Even the big payment startups like Square, ISIS, and Google Wallet, require not only financial institution partnerships but also partnerships with big processors like Fiserv. Regardless of the product, the financial startup likely requires a partnership with an established company in the same sector the startup is likely trying to shake up.”

Every tech field involves legal complexities. While big corporations have their own lawyers to maneuver complicated legal regulations, start-ups are on their own. And it’s a big deal. While some financial technologies may be far less intrusive, some could face intense quagmires. GoCardless, a UK-based online direct debit provider, has been sponsored by RBS (Royal Bank of Scotland) and handles $1 billion of transactions a year. Even their founder, Hiroki Takeuchi, has noted the difficulty in understanding regulations, as well as penetrating the bank-owned financial infrastructure. “To get access, you need to set up some sort of arrangement with a bank that moves at a glacial pace.” They didn’t go it alone, and it took a lot of work to work with the famed glacial pace of traditional banks.

Then there is the tale of Zenefits, an incredibly hot start-up dealing with employee insurance benefits—among other things. Having thoroughly annoyed insurance companies in the area, Zenefits was attacked with legal battle after legal battle. Angering brokers and regulators is often the last thing FinTech start-ups intend to do, but that doesn’t mean trouble won’t come looking. Throwing curveballs is almost to be expected in the financial world, much like Prosper and Lending Club saw back in 2008 when they were hit with legal claims they weren’t operating in accordance with regulations—the result of simply not grasping the legal jargon and what it really means.

Finances are very complicated market, legally and socially. While a humble start-up may have the consumer’s best interests at heart, that doesn’t mean society will see it that way. TandemMoney was marketed as an “emergency fund for the underbanked,” and as swiftly as they appeared they were slapped with legal papers. Rather than garnering immediate sympathy from on-lookers as a poor start-up cornered by big banks, there were debates on whether their product was socially and financially healthy. They caused worries that their tech would be exploited to avoid payday lending laws. It was also termed “payday lending in disguise” by watchdogs. In the end, TandemMoney joined the other FinTech start-ups in the graveyard. Their missteps remind that social and legal regulations in the financial sector can be far more dangerous than in other areas.

Respect Marketing and Your Markets

One of the biggest reasons start-ups fail is that they simply make a product that no one wants. Models and apps that don’t engage customers don’t gain traction. The fact that Starbucks is able to kick Apple and Google to the curb with their payment app should highlight how tricky customers can be. If customers care about the product and are engaged, then they will be a great friend. Mobile payment system M-Pesa was able to succeed in Kenya because they made the right partners. Their audience seemed to love them from the start, simply because they were tied to the right companies. Soon after, hundreds of other companies would try to market almost the same product and end up completely ruined. It was M-Pesa’s partnerships that created serious traction with users and even the government. They knew their market and how to use it. 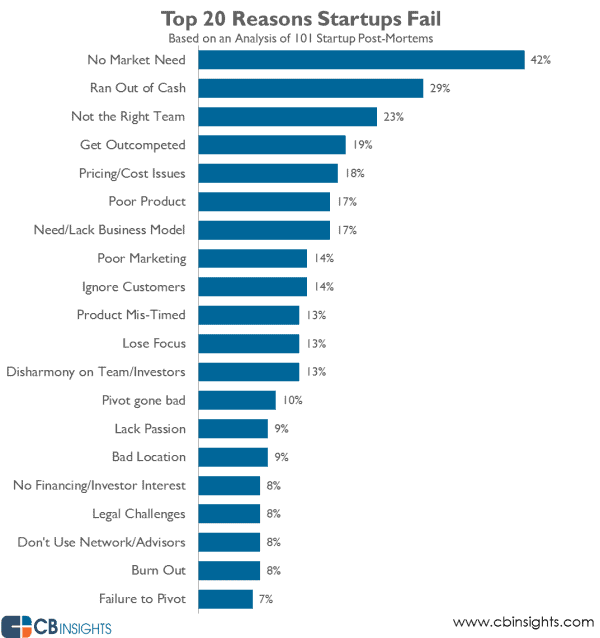 Conversely, the story of failed personal finance management site Wesabe offers a stern warning. Marc Hedlund, Wesabe founder, described the tale of how his company effectively lost to Mint in a blogpost, here. One of his biggest realizations is that, while they had a great product, they didn’t get quite get their audience. “Mint focused on making the user do almost no work at all… we completely sucked at all of that.” It’s important to recognize each start-up as one of many. Wesabe may be great; but if consumers don’t love it in those first few keystrokes, they may just move on to something better. Yes, there is probably something better.

Deceased start-up Blippy also thought they knew their customer. They’ve stated that “the big question that Blippy answers is ‘What are your friends buying?” and it sounds convincing. It’s great that they’re answering a question; unfortunately, it was a bad one. Blippy wanted to let you share your purchases with friends, and make the act of buying a social event. It took a long time and several iterations before Blippy released the real question was “who cares?”

In the end, 90% of start-ups will still fail. A FinTech graveyard of post-mortem words should serve as a wealth of information and support for founders and employees. Startupbootcamp Berlin has even hosted Failure Lunches celebrating dead start-ups. There is a lot to be learned from lost start-ups, so take advantage of the wealth of knowledge before dooming your own company to join the graveyard.

A nice chart/study from CBInsights. It’s not a necessary photo, but could be nice if you wanted some visual data