by Hannah Augur
in Data Science, Energy & Environment, Internet of Things
Home Topics Data Science
Share on FacebookShare on TwitterShare on LinkedInShare on WhatsAppShare on e-mail 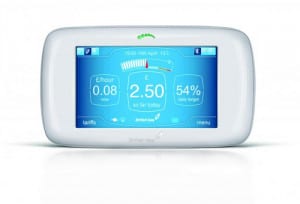 Energy is a huge conversation and big data is already being used to make incredible changes. It’s leveraged to create better oil and gas practices, keep better tabs on expenditures, and even ramp up the renewable energy movement. With not just one, but countless companies integrating big data practices, the entire nature of energy and energy consumption may change in surprising ways. Big data is even being called to help combat climate change. The right data could not only raise awareness but lead to real ­world results. But let’s start a little smaller, with something more tangible: the smart meter.

Smart meters are electronic devices that record energy consumption on a usually hourly basis. Compared to usual methods where energy is gauged quarterly or even annually, smart meters keep consumers and providers up­to­date with accurate, relevant information. They help businesses and households understand their energy consumption as well as how to decrease it. Once consumers see how much energy they are wasting and where, there is no doubt many of them will cut back. Whether for financial or environmental reasons, most of us don’t particularly enjoy wasting energy.

There are five components to energy consumption: water, air, gas, electricity and steam. Energy analytic software records and analyzes the exact expenditures, breaking consumption down into bite­size pieces. Data technology illuminates that exact point where waste is occurring. For the consumer level, there is (or was) Apple’s smart meter “Nest.” The meter learns your patterns and adjusts energy automatically. For companies, there’s intelligence provider FirstFuel. According to CEO Swapnil Shah “We don’t just say you need more energy­efficient lights. We can tell the building manager he needs to replace five lights on the 14 technologies are often more accurate than an on­site audit, and might leave you baffled by their results. Such analyses helped the GSA discover two large exhaust fans running unnecessarily. The realization led to the fans being reset, and saved about $800,000 in just one year. Strangely enough, Microsoft also used data technology to uncover rogue fans wasting some $60,000.

If it’s so easy and wonderful, why don’t we all have Smart meters?

GE’S chief development officer Paul Rogers noted that such machines could eliminate up to $150 billion in waste, and yet most of us are still doing things the old ­fashioned way.

One huge hang­up about integrating big data and energy consumption is that it is, quite simply, complicated. It’s hard to understand; it’s hard to collect. The last thing a busy person wants to hear is “let me explain to you how big data can save you money.” Trying to shove more information down a consumer’s throat is almost always going to end badly. This is why companies properly utilizing big data are necessary to help those same consumers understand and overcome these hang­-ups.

[bctt tweet=”Let me explain to you how #BigData can save you money.”]

Companies like IBM have already gone ahead and wrangled in big data to save big money. The IBM Insights Foundation for Energy isn’t just helping other companies, it represents IBM’s own, very real conservation measures. Again, whether it’s cutting down on expenditures for the environment or your own bottom dollar, the result is the same. IBM saved $43 billion in one year just by cutting back on energy consumption. This cause came about not because of political or social pressure, but because it made sense financially It seems that everyone wins when big data meets energy.

Reaffirming the idea going green equals more green, the manager of Industrial Cyber Security at GE explained just how many billions of dollars some of the world’s largest energy users could save by being more efficient. He adds that data gleaned from connected machines could lead to over $60 billion in savings in the gas power sector alone. It’s clear that big data can help clean up a messy industry by cutting back on wasting precious fuels. But up next, the future.

Building energy efficient cities is a huge field of study that has yielded tangible results. Studies indicate that two­thirds of the population will be living in cities by 2050. This doesn’t simply mean waving goodbye to suburbia, it means facing a host of new problems. How can we accommodate all of those automobiles? What does that mean for power plants and distribution?

Study after study has indicated that big data will be integral to keeping the city of the future running smoothly. Many are suggesting that cities do away with the “ship in goods, ship out waste” paradigm. Hence, the smart grid.

Though it truly sounds like a crazy hyper­-connected sci­-fi world, the smart grid relies on interconnected smart meters, appliances and renewable energy that works as a unit. It can identify faulty parts, and let’s providers predict where energy is most needed or wasted.

The only thing missing in our city of the future is optimized renewable energy. This doesn’t just mean strapping solar panels on every side of an apartment building. Renewable resources are notoriously finicky. They seem unpredictable and intermittent. Only by properly collecting and analyzing data can the potential of these resources be fully harnessed. Hard up­-to-date evidence is necessary for understanding and properly managing these well­ intentioned endeavors.

IBM, once again, proves to be a great example. In 2011 they mixed business with accidental environmental friendliness. Teaming up with energy company Vestas Wind System, IBM used their big data skills to pinpoint exactly where wind turbines would function most efficiently. Making better business decisions meant that Vestas could simultaneously accelerate their own growth while addressing some of the world’s biggest problems. Now, consulting big data before installation, or even visiting the installation site has become widespread.

Perhaps the biggest indicator of how big data will impact our future relationship with energy can be seen in the way global companies have already been utilizing it for years. With names like Microsoft and GE already on the bandwagon, it’s a matter of time until we get to experience it first hand.