A new iOS app Am I Going Down? refutes the claim that there’s a “one in a million chance” of your plane crashing. In fact, if you’re on a Boeing 747-700 flight from San Francisco to Dallas, there’s a 1 in 4,593,011 chance you’ll crash. A Boeing 777 Cathay Pacific flightfrom Hong Kong to Los Angeles is much more risky; you have a dicey 1 in 4,068,434 chance of a crash. If you’re intending to take this flight every single day for the next 11,146 years, brace yourself for an incident.

The app was developed by London-based company Vanilla Pixel, with the express intent of calming the nerves of fearful flyers. “The initial inspiration comes from my co-founder and wife, Julie, who for many years has suffered from a fear of flying,” developer Nic Johns told CNN. 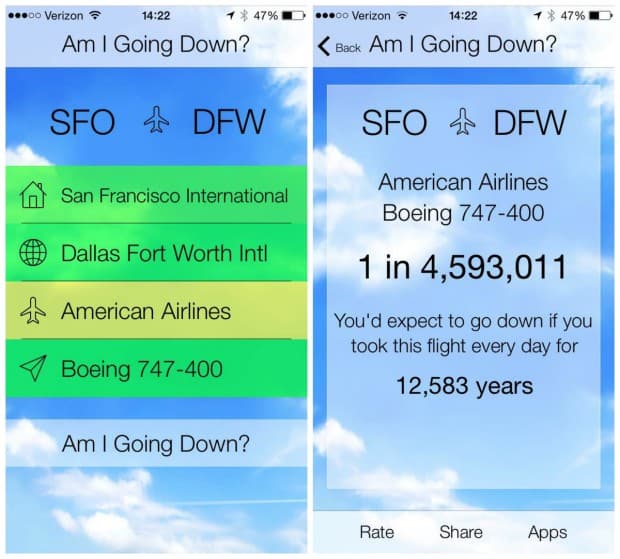 Whilst the premise is lighthearted, the data itself is extensive. Johns and co scraped data from 10 million routes, using sources such as the Geneva-based Bureau of Aircraft Accidents Archives, the United States National Transportation Safety Board and the Montreal-based International Civil Aviation Organization.

“For my analysis I only include crashes where there was at least one passenger fatality — which is the relevant stat for those with a fear of flying,” Johns explained. “I then incorporate the volume of flights, weighted to the most recent 10 years, to provide the final ‘one in a million’ statistics.”

The timing of both the initial development and release of the app was unfortunate. Johns began working on Am I Going Down? in February 2014, unfortunately coinciding with the disappearance of Malaysia Airlines flight MH370. Uncanny timing plagued the team again in December- two weeks after the submitted the app to the Apple Store, AirAsia flight QZ8501 crashed. According to the Daily Mail, Vanilla Pixel temporarily removed the airline from their app’s list.

If you would like to discover the exact odds of a crash on your next flight, the “Am I Going Down?” app is available from the ITunes store now. 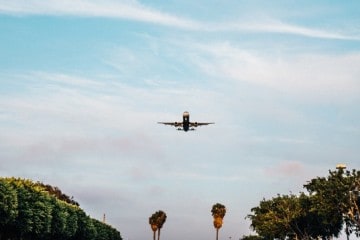