The Disrupt Europe 2014 Hackathon just happened and the Old Billingsgate in London was witness to 89 teams come up with “neat, funny and smart” hacks that might somehow affect change through the tech industry, with the big prize winners having a lot to do with healthcare.

The limelight belonged to Infected Flight that won the Disrupt Europe 2014 Hackathon grand prize, followed by Appilepsy and Seeusoon as runners up.

“Behind the scene, Infected Flight analyzes real flight path data (source city, source airport, flight time, destination airport and destination city) to figure out whether your country is greatly affected by a disease or not,” writes  Romain Dillet of TechCrunch.

Appilepsy on the other hand is a mobile app that detects the occurrence of convulsive epileptic seizures using a proprietary algorithm. Analysing accelerometer data in real time the app sends a text message and calls previously stored emergency contact.

Seeusoon, the other runners up, monitors flights and alerts long distance couples to meet in the same city for a romantic weekend, with the option to buy tickets integrated within the app. The user experience has also been appreciated.

iComic received an honorable mention for its work. The three teams get to showcase their app at the Disrupt stage in London on Tuesday. The prize money for the winner is £3,000 while other participants received prizes from the event’s API sponsors. 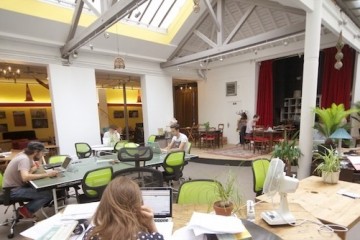 Hackathons, Smart Cities and Startups: Life Inside a Coworking Space