This Model Can Predict 7 out 10 Supreme Court Rulings

It is widely believed that predicting natural elements- the spread of wildfire, or disease, for example- is entirely possible. Yet when it comes to modelling human behaviour, many like to think there’s a certain unique, unpredictable character to humanity that cannot be pinned down by algorithms. Yet three scholars- South Texas College of Law’s Josh Blackman, Michigan State’s Daniel Martin Katz, and Bommarito Consulting’s Michael Bommarito- have built a predictive model which can determine how US Supreme Court judges will vote, with nearly 70% accuracy.

In a blog post announcing the model, Blackman states the model “correctly identifies 69.7% of the Supreme Court’s overall affirm and reverse decisions and correctly forecasts 70.9% of the votes of individual justices across 7,700 cases and more than 68,000 justice votes.” There have been similarly accurate models before, but not over such a broad span of time. This model predicts the outcomes of cases from 1953 to present, across 7,700 cases and in excess of 68,000 individual justice votes, spanning the Roberts, Rehnquist, Burger and Warren courts.

The model itself is incredibly complex. It was created using data from the Washington University at St. Louis’s Supreme Court Database, plus their own additional variable. It uses 95 variables with 4- or 5-place decimal weighting. Each justice’s vote is determined by 4,000 extremely randomised decision trees. To put it simply, Bonmarito asks, “Have you seen some of those memes that go around where there’s a big flow chart where you’re supposed to answer ‘Yes,’ or ‘No,’ to a bunch of questions and there’s a sassy response at the bottom?” The decision trees resemble these, albeit with more mathematical accuracy and less sassy responses. 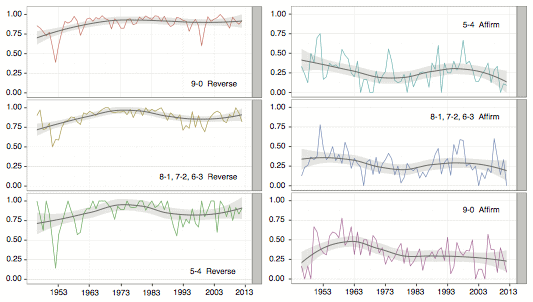 One of the more interesting findings is evidence that Supreme Court justices are not above politics. “If there were an argument ongoing between political scientists and lawyers as to what mattered, as to whether judges are really independent judicial reasoning machines on high, or whether they’re just political animals like anyone else, then in terms of the features that the model uses to successfully predict, it appears they’re just political animals,” Bonmarito remarks. Alot of the Supreme Court decisions are 9-0 reversals of decisions from the lower courts. But in the one in three cases where the court affirms the lower court’s ruling, ideological lines are drawn and the model gets alot less accurate.

Moving forward, the team are looking at extending the predictive model to predict lower court decisions. There isn’t a strong database from outcomes of district and appellate court cases. Such a model could prove extremely valuable for lawyers plotting their courtroom negotiation strategies.