To say that the cloud computing market was exploding would be an understatement. In July, we heard multiple reports supporting the proclamation of cloud as the next revolution in the computing industry. The IDC claimed the cloud computing market at the close of the year would be worth $4 billion in EMEA. In the UK, 78% of organisations have “formally” adopted one or more cloud-based services. Fujitsu recently announced they’ve set aside $2 billion to expand their cloud portfolio. Evidently, the cloud is big business.

The market continues to be dominated by Amazon Web Services, with Microsoft and IBM making serious inroads. But there’s one industry giant missing from this list: Google. In Q2, Microsoft’s cloud infrastructure revenue grew by 164%; Google lagged at only 47%. But Google have a secret weapon in their cloud portfolio, whose release may sky-rocket their market share- Google Cloud Dataflow.

What is Google Cloud Dataflow? 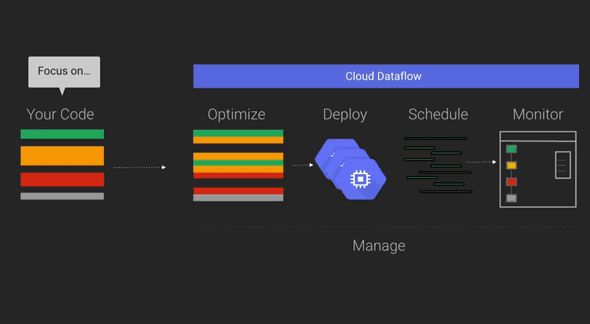 Cloud Dataflow keynote slide; source
In short, Cloud Dataflow allows you to build pipelines, monitor their execution, and transform & analyse data, all in the cloud. In a “sneak peek” blogpost, Google stated Cloud Dataflow will allows you to gain “actionable insights from your data while lowering operational costs without the hassles of deploying, maintaining or scaling infrastructure.” It’s still currently in private beta, but here’s an overview of what we know so far:

What Does Cloud Dataflow Mean For Existing Google Cloud Customers?

Google Cloud Dataflow keynote slide; source
Dataflow is designed to complement the rest of Google’s existing cloud portfolio. If you’re already using Google BigQuery, Dataflow will allow you to clean, prep and filter your data before it gets written to BigQuery. Dataflow can also be used to read from BigQuery if you want to join your BigQuery data with other sources. This can also be written back to BigQuery.

Are Google the Only Major Players Tapping into Data Flow?

FlumeJava, from which Cloud Dataflow evolved, is also involved the process of creating easy-to-use, efficient parallel pipelines. At Flume’s core are “a couple of classes that represent immutable parallel collections, each supporting a modest number of operations for processing them in parallel. Parallel collections and their operations present a simple, high-level, uniform abstraction over different data representations and execution strategies.”

Many see Cloud Dataflow as a competitor to Kinesis, a managed service designed for real-time data streaming developed by industry leaders Amazon Web Services. Kinesis allows you to write applications for processing data in real-time, and works in conjunction with other AWS products such as Amazon Simple Storage Service (Amazon S3), Amazon DynamoDB, or Amazon Redshift.

Does Google Cloud Dataflow Mean the Death of Hadoop and MapReduce?

On the subject, Ovum analyst Tony Baer told InfoWorld Cloud Dataflow forms “part of an overriding trend where we are seeing an explosion of different frameworks and approaches for dissecting and analyzing big data. Where once big data processing was practically synonymous with MapReduce, you are now seeing frameworks like Spark, Storm, Giraph, and others providing alternatives that allow you to select the approach that is right for the analytic problem.”

It is true MapReduce use in the decline. But that’s why Hadoop 2.0 introduced YARN, which allows you to circumvent MapReduce and run multiple other applications in Hadoop which all share common cluster management. One application that’s gained considerable attention is Spark; as InfoWorld states, which can perform map and reduce in-memory, making it much faster than MapReduce. Of course, such applications can run on top of Hadoop, so whilst there are now many different approaches to MapReduce, it doesn’t mean Hadoop is dead. Current Hadoop users have all of their data stored on-premise, and it’s unlikely that a considerable number of these users are going to migrate all of their data to the cloud to use Cloud Dataflow. In short: Hadoop is safe for now.

This post will be updated as and when further updates about Cloud Dataflow are announced, to give you an up-to-date guide on advancements ahead of its release. 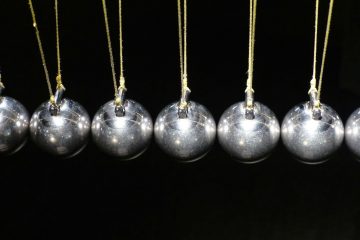 How to do time series prediction using RNNs, TensorFlow and Cloud ML Engine