For those of you uninitiated with The Ice Bucket Challenge, the basic premise is as follows: a person has a bucket of ice water tipped over their head. They then nominate two friends to also tip a bucket of ice water over their head, and said friends have 24 hours to complete the challenge. Before you question this lunacy, it’s for a good cause. Any money donated goes to ALS Association, to research the motor neurone disease amyotrophic lateral sclerosis. The campaign was started by the family of Pete Frates, a baseball player who was diagnosed with ALS two years ago.

The list of big names involved continues to grow- Oprah, Lady Gaga Robert Downey Jr and The Roots have all already participated.

As the list of participants continues to grow and grow, you might wonder: how long can this madness last? The answer is 22 days. In that time, the number of participants (if everyone complies and completes it in the allotted time) will surpass 7 billion, the world’s total population. 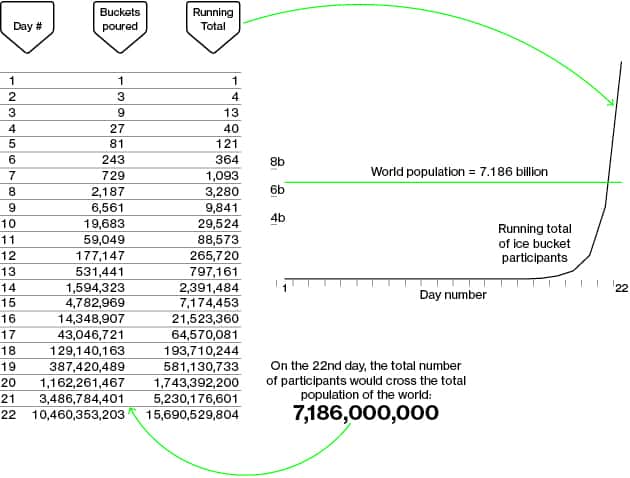 According to data from social intelligence company Brandwatch, the number of social media mentions of The Ice Bucket Challenge surpasses 480,000 in the past seven days (excluding spam and irrelevant mentions). Overall, the campaign has garnered over 4 billion total impressions already. According to Forbes, this self-imposed cruelty isn’t for nought- as of the beginning of the week, 2014 donations to ALS have reached $11.4 million, compared to $1.7 million total last year.

So, if the entire population is game, expect to have freezing cold chucked over your head in the next month. You have been warned.

60 Seconds with the Most Connected Man on Earth