The Cold, Hard Data Behind the Ice Bucket Challenge

If you’ve been on social media in the past couple of weeks, you’ll undoubtedly have seen videos of people chucking freezing cold water on their head. Mass lunacy? Quite possibly, but it’s also for a good cause; the ALS Ice Bucket Challenge. We’ll refrain from joining the throngs of media outlets publishing definitions of this craze weeks after its inception (but if you’ve been living under a rock for the past month, we recommend The Guardian’s guide). Instead, we offer you a look at the cold, hard data behind this social media phenomenon:

The birth of the viral campaign is often contributed to the family of Pete Frates, a baseball player who was diagnosed with ALS two years ago. However, due to the wonders of the internet age, it has since been revealed the challenge originated from a dare amongst a circle of pro-atheletes. The challenge included the caveat that if you failed to douse yourself in ice water, you had to donate $100 to the charity of your choice. The affiliation with ALS was a nice byproduct that came about as the campaign gained traction.

To say the campaign has gained traction is a bit of an understatement. According to stats curated by Jeremiah Owyang yesterday, the campaign garnered:

If half of the Youtube videos actually involved participants dumping ice cold water on their head, with an estiamted gallon of water each, that equates to 1,165,000 gallons of water used.
This the equivalent of 1.7 Olympic swimming pools, 39 years of a single American’s water consumption, according to Owyang.

Some have raised concerns about the superfluous use of water, sparking fringe campaigns such as the Rice Bucket Challenge– and famed water conservationist Matt Damon dumping toilet water on his head.

When Will It All End?! 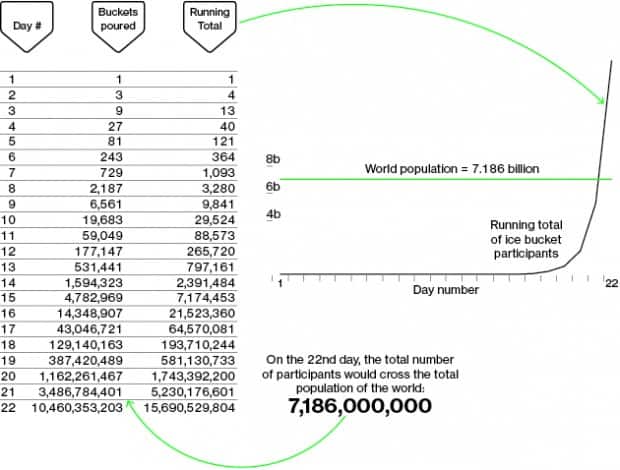 In a news article last week, we reported that if everyone adheres to 24-hour rule (you have 24 hours to comply after posting), the challenge will burn out in 22 days. This is the point at which the number of people challenged will exceed the number of people on the planet. However, considering we’re currently in week four, it would seem that some Ice Bucket candidates are not playing by the rules…

According to stats released on the ALS Association yesterday, the total raised was a staggering $88.5 million. Over the past week, donations average at $9 million each day. Compare that to the fact the ALS Association received $2.6 million between July 29 and August 26 last year, and you begin to understand the phenomenal success of this campaign.