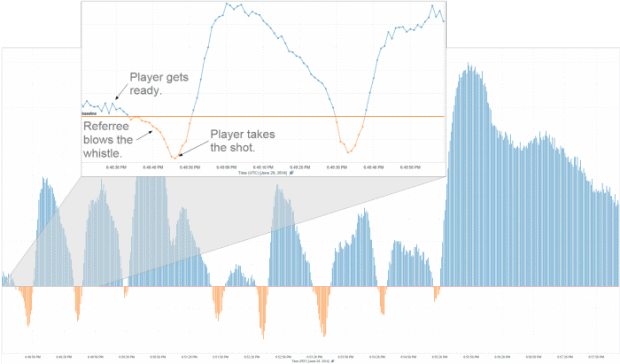 Twitter has released a tweet analysis of online activity during the penalty shootout of Brazil vs. Chile quarter final face-off. The last penalty kick sparked the highest rate Twitter activity in a single minute seen during the World Cup, with 388985 TPM. “However,” the Twitter blog post points out, “sometimes a silence can tell just as rich a story”.

Tweet analysis has thrown up an interesting phenomenon, which Twitter says is the case in all penalty shootouts. The image above shows a closeup of the first shot by Brazil’s David Luiz. As you can see, Twitter activity is pretty healthy before the kick. During the kick though, Tweets per minute plummet, as football fans pry their eyes and hands away from the keyboards and become transfixed by the action. Immediately after the kick, whether or not a goal is scored, Twitter activity goes mad.

It’s an interesting phenomenon, and one that proves that there are some moments in life exciting enough to tear us away from virtual reality, to celebrate or comiserate with those around us.