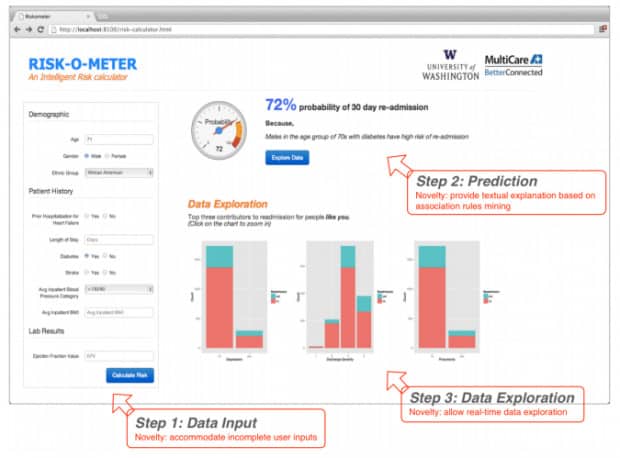 It’s often said (with a slight tone of disdain) that American hospitals are run like businesses. What better way then to improve efficiency and healthcare than with financial sticks-and-carrots?

This was the idea behind part of the Affordable Care Act, otherwise known as Obamacare. Heart failure re-admissions alone cost Medicare $15 billion a year, and the legislation aimed to change that. What they put in place was financial incentives if hospitals were able to slice re-admissions, and the removal of payment for treatment for hospitals whose readmission rates continued to soar. Estimates place the amount of re-admissions that are preventable between 20% and 75%. With financial incentives in place, so thought the legislative team, it might spark healthcare professionals to do something about this preventable problem.

And they were right. Researchers at the University of Washington, Tacoma, developed a Risk-O-Meter powered by machine learning, and put it to the test in a hospital in Seattle. The Risk-O-Meter considers over 100 different metrics about a particular patient, ranging from obvious factors such as vitals to demographic information, and uses this data to assess how likely it is a patient will be re-admitted. It moves the focus on treating heart failure patients from treating the problem as it occurs, to hopefully preventing the need for re-admission altogether.

The Risk-O-Meter has thrown up a few surprising results. Firstly, as lead researcher Ankur Teredesai notes, “The chances of then getting readmitted are higher — much higher — if [patients] live alone. … The models actually show that.” Secondly, the amount of time Doctors keep patients in after heart failure might be ineffective. The standard time patients stay in hospital after heart failure is typically 13 days- the model shows the readmission risk is significantly reduced after 10 days, but spikes again at 13, right at the moment of medical discharge.

The system, Teredesai states, was constructed with privacy as a priority. No data is stored in the model itself; it’s simply input and then wiped when a risk score is calculated. The system was built on Microsoft Azure, which is HIPAA-compliant.

The future plan for the Risk-O-Meter is vague; the team are currently looking to commercialise their impressive and vital tool, either through the cloud or by starting their own company. We recently reported on how a New York hospital is using Machine Learning to make more accurate diagnoses in cardiac dysfunctions; one cannot help but wonder how powerful these two technologies could be if combined.