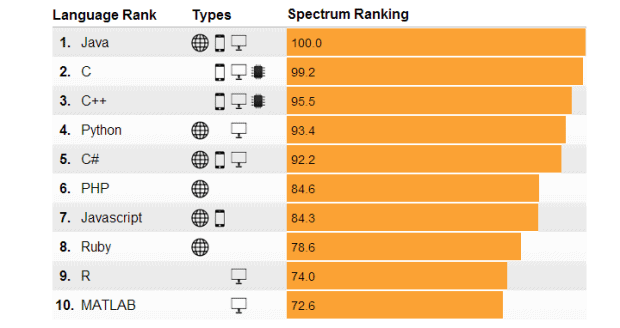 IEEE, the “world’s largest professional association for the language of technology”, have released an interactive ranking of programming languages. In the overall list, as well as many of the sub-rankings, Java emerges as the victor.

The IEEE blog details how they went about creating their definitive rankings.

“Starting from a list of over 150 programming languages gathered from GitHub, we looked at the volume of results found on Google when we searched for each one in the pattern “X programming” where “X” is the name of the language. We filtered out languages if they had a very low number of search results and then went through the list by hand to identify the most interesting languages. We labeled each language according to its use in Web, mobile, enterprise/desktop, or embedded environments.

Our final set of 49 languages includes names familiar to most computer users like Java, stalwarts like Cobol and Fortran, and more recent but niche languages like Erlang.”

From there they ranked the languages using 12 differently-weighted metrics and data from 10 different sources, including Google Trends, Github, Hacker News and Career Builder. The interactive rankings (which you can explore for yourself here) also allows you to break down the rankings by language type (Web, Mobile, Enterprise, Embedded), and create custom filters to see which languages are prevalent in your industry.

In their overall ranking, their “Trending” ranking (which languages are growing rapidly), their “Jobs” ranking (the most in-demand with employers) and the “Open” ranking (popularity on social media & open source hubs), Java emerged the victor. Hot on Java’s tails in each of the rankings were C and C++, with Python and Javascript also performing well across the metrics.

The post has already received 265 comments from developers. The main sore issue appears to be not the rankings themselves, but whether the rankings should say PERL or Perl. If you have a particularly strong view on this matter, feel free to delve into the discussion here.