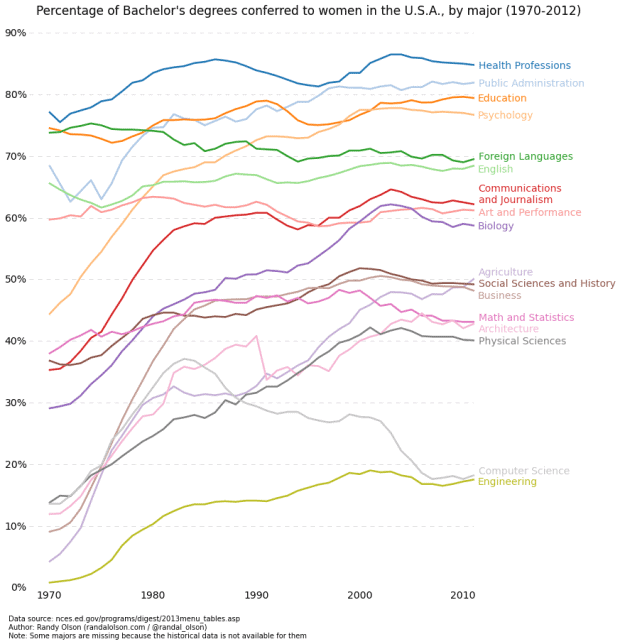 Randal Olson has been using statistics garnered from NCES 2013 Digest of Education Statistics to look at gender disparities in different study fields. Speaking about this study on his blog, Olson wrote:

One oft-cited problem with Computer Science is its glaring gender disparity: In a given Computer Science class, men will outnumber women as much as 8 to 2 (20% women). This stands in stark contrast to most other college majors, which have women outnumbering men 3 to 2 on average (60% women). This observation made me wonder: Are other STEM majors suffering the same gender disparity?

Taking into account the stereotypical-but-ubiquitous view that “boys likes sciences, girls like humanities”, you may expect the STEM subjects to weighted heavily towards males; but this isn’t the case. 40-45% of recipients of degrees in Maths, Statistics and Physical Sciences were female, very close to a total balance between genders.

Provided that far more women attend college than men, it seems the best way to meet the U.S.’s growing need for skilled programmers and engineers is to focus on recruiting more women — of any race or ethnicity — into Computer Science and Engineering majors. The big question, of course, is “How?” With the constant issues of subtle (and sometimes not-so-subtle) discrimination against women in these male-dominated majors, we have quite a tough task on our hands.

Let’s hope the gender balance- and the balance between supply and demand for computer scientists- approaches an equilibrium in the coming years.

Can You Turn Big Data into Big Dollars?