Mapping Your Personality With Big Data 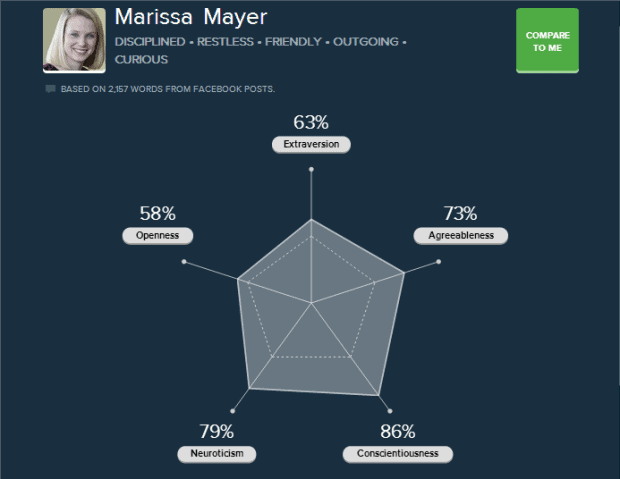 We live in era of self-archiving. Of course, this has its advantages; it can help you promote projects, brands, and potentially even land you a job. But the problem with self-archiving and social media is you can never know exactly who’s paying attention to that video you publicly posted to a friend, or that gratuitous snap of your dinner you sent to your hundreds of followers. Five wants to change that; marketing itself as a “network of intimate conversations”, it aims to remove the pageantry and inject dinner-party intimacy into our online conversations. Their first move in their mission was to launch Five Labs, a new tool which assigns a personality profile to users based on the wording of their Facebook posts.

Five Labs is based on a project by the University of Pennsylvania which compared the language people used to their affinity with the Big Five personality traits; openness, conscientiousness, agreeableness, extroversion and neuroticism. Five Labs uses these findings and trawls through your Facebook posts, creating a personality profile based on the language you use. Talking about the machine learning techniques this method employs, Five founder Nikita Bier stated “We wanted to build a tool that could communicate exactly what that means at a broadly accessible level.”

Whilst it may seem like merely a fun tool, Bier highlights its significance: “It’s now possible to glean data from your social media profile that you never actually provided.” Social media sites can build up a picture of who you are just by analysing your vocabulary; and what they decide to do with that information is up to them. We recently reported on how being assigned certain characteristics by Big Data brokers, such as being a “motorcycle enthusiast”, can impact you financially without you ever even knowing it. Five Labs highlights that even when we think we’re being reasonably private on our online profiles, we may be giving away more than we know.

Five’s exact plans for a more intimate, private social media product remain vague. What we currently know is the product is slated for release in autumn, and hopes to generate “more of the dinner table conversation that could happen on the internet before 2004.” Although a detailed insight is yet to be seen, in an era of increasing privacy concerns, Five could definitely be on to something.