Whether you like it or not, the gender gap is still a pressing social issue. We live in an age moving towards gender equality, but where it is still not realised. Many say that need that the need for feminism has passed, and that gender equality is a reality in our society. Yet there’s still considerably less women in the top-tier jobs, and they’re still getting paid less than their male counterparts. In their talk at Berlin Buzzwords this week, Ewa Gasperowicz and Felipe Hoffa explored the gender gap using Freebase and Google BigQuery.

Freebase is an open-source database for structured data, housing over 1 billion facts about 42.9 million entities. It contains 2.4 billion ‘triples’ about these objects, which are facts composed of subject-predicate-object (for example Daft Punk-appears in- Tron). Anyone can add data to Freebase, providing it’s less than 1% duplicated or conflated with existing data. Obviously as a dataset, Freebase is massively skewed towards celebrities, but analysing this data gives us a good understanding about the men and women at the forefront of public consciousness. Gasperowicz and Hoffa used Google BigQuery to analyse and explore this 88GB dataset. Here are some of their findings.

1. The Gender Gap is Immediately Noticeable

So there’s almost triple of the amount of notable males than notable females. Straight from the off, we can see a gender disparity, which widens when we start looking into specific professions and locations.

Interestingly, they also showed the most searched-for women on Wikipedia in real time. The top three most searched for women were:
1. Marine LePen
2. Kim Kardashian
3. Shakira

LePen’s presence can be attributed to the European elections we had that day. Other than that, we have a popstar and a woman famous for being famous. I’ll leave it up to you to decide if these are the ideal female role models to be dominating public consciousness.

Gasperowicz & Hoffa used Google Maps to visualise the male:female ratio in jobs around the world. Red indicates dominated by females, blue dominated by males, and purple indicates balance; the intensity of the colour relates to the amount of data available. To demonstrate how profound the gender gap can be between professions, consider the visualisation for models:

Compared to the visualisation for politicians: 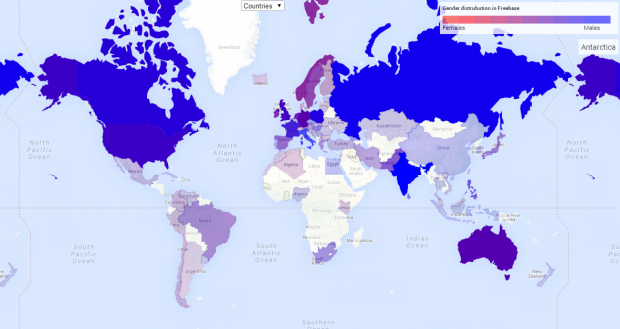 And the map for business people presents a gender skew too: 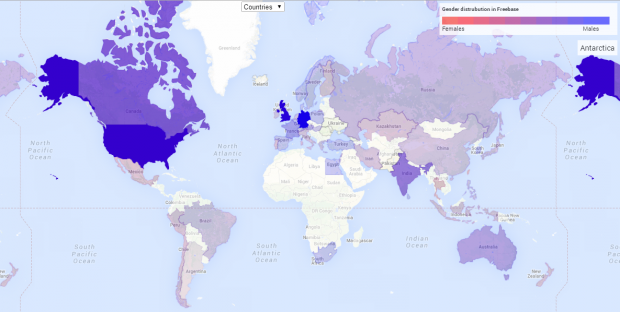 Out of the 117 German notable business people listed on Freebase, only 8 are female. There is greater equality in some creative professions such as writer, author and novelist, but the map for every media production profession (director, producer, screenwriter…) is almost entirely blue. Sports as well are almost unanimously dominated by males. You can see the stats for yourself here.

3. The Gender Gap Grows- and Shrinks- at Certain Ages 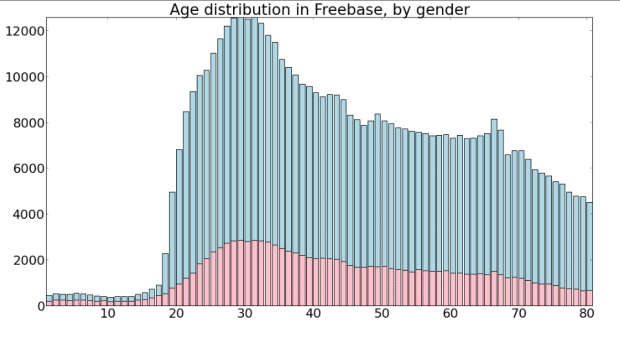 Gasperowicz & Hoffa also explored the ages of the notable males and females of Freebase. There was an obvious rift between 20-year-old males and 20-year-old females:
This was attributed to the dominance of athletes in this age category, particularly in college sports in the US.

However, looking forward, there is some good news: the gender gap decreases with age. They found significantly more females in most professions aged 40 compared to age 20. It will be fascinating to see how the data changes when the current 20-year-olds hit 40 themselves.

An audience member asked if they had a map for data scientists. A cursory glance around the conference would suggest that map would be fairly blue. Hoffa replied that they did not, but that Google were committed to giving opportunties to female data scientists. Let’s hope that more companies gain an awareness of the gender gap, and that in years to come all of these maps start looking less blue and more purple.