When it comes to marketing a product, Amazon ratings can make or break a business. I’ve lost count of the times I’ve been talked in to (or out of) buying a product based on a passionate review or a high or low rating. Nithyanand Kota spent alot of time contemplating the significance of Amazon ratings, asking questions such as: Can a user actually differentiate between 1 and 2 star ratings? And why do certain items have bipolar ratings- is someone gaming the system or is it a politically charged item?

So began Kota’s “fishing expedition” in to Amazon rating analysis. For his research, Kota used the Amazon Annual Bestseller list, which contains the 100 best selling books on amazon for the past 19 years (beginning in 1995).

Here are some of his more interesting findings: 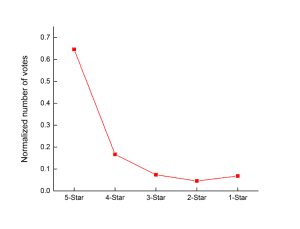 The most interesting finding in this graph of normalized ratings is the relative lack of 2-star ratings. Kota attributes to this to ‘the nature of internet feedback’- we’re more likely to take to the internet to give an extremely disdainful 1-star review than a mildly disappointed 2-star review.

2. Amazon Ratings (and Maybe Internet Book Sales on the Whole) Are Still on the Rise 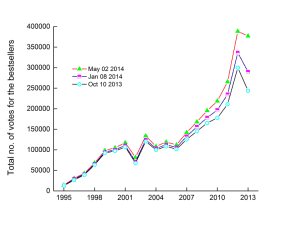 3. 9/11 Had a Noticeable Affect On Literature Consumption

Looking at the same graph, you’ll notice two obvious dips. One is for 2013, which Kota assumes is due to the fact the titles are newer and therefore less widely-read and reviewed, and this should correct over time. The other dip, completely disrupting the otherwise monotonic increase, Kota attributes to a ‘post 9/11 reading lull’.

4. Everyone Loves Dr Seuss- But Opinion is Split on Tom Clancy, JK Rowling and John Grisham 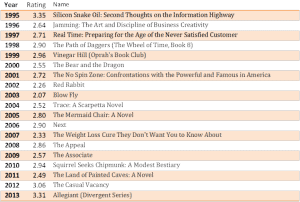 Kota’s table of the worst-rated best sellers of each year features some pretty big names, including Rowling, Grisham and Clancy. Kota poses the possibility that so many novels end up on this list because fans of novelists lack the ‘religious zeal’ of fans of political/spiritual books, and are less likely to take to the ratings board to defend their favourite works against the detractors. 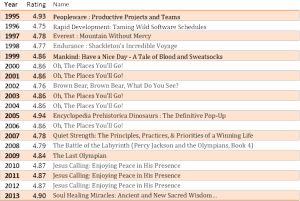 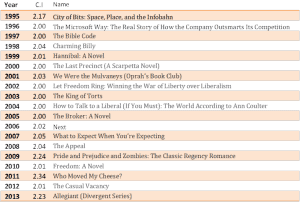 Above is a table of the books that most divided opinion for each year. Kota assumed on campaign/election years, the most controversial books would be political- but this is only the case for 2002 and 2004. Indeed, some of the most divisive titles are considered modern classics, such as Joyce Carol Oates’ We Were the Mulvaneys– and, of course, Pride and Prejudice and Zombies.

Also, in four of the years (2006, 2008, 2012 and 2013) the most controversial bestseller was also the worst-rated bestseller- suggesting being controversial and divisive isn’t necassarily healthy for your ratings.

You can find out more about Kota’s study here.